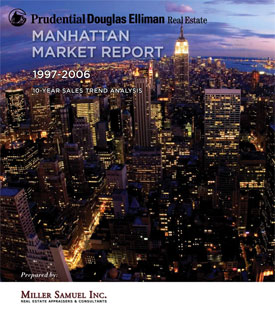 The PDF version of the 1997-2006 Manhattan Market Report [Miller Samuel] [1] that I write for Prudential Douglas Elliman [PDE] [2] is available for download. I have been writing these market reports for them since 1994. The report is the aggregate of the four previous quarterly reports.

More than 85,000 co-op and condo sales transactions from more than 6,400 buildings over the last ten years were analyzed. Each of the 53 different market areas was analyzed with data tables and charts as well as a summary matrix with prior year and prior decade comparisons.

I lovingly have dubbed this report “The Phone Book” for the pages and pages of “numbers” it contains. Even though the quarterly gets more coverage in the media, this report has about the same number of annual downloads as the four quarterly reports, combined.

In addition, you can see the [methodology]) that went into the report including the neighborhood boundaries [3] and the type of content [4] we have available.

At the end of 2006, there were 5,934 units listed for sale, down 0.5% from the prior year total of 5,964 units. The first half of the year, however was characterized by sharply increasing inventory levels, peaking in the second quarter at 7,640 units. Inventory leveled off in the third quarter and dropped back to levels seen at the end of 2005.

For the second straight year the days on market and listing indicators expanded. The increases this year as compared to the prior year were larger, returning to levels that existed before the housing boom began in the early part of this decade….