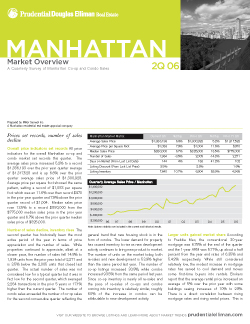 The PDF version of the 2Q 2006 Manhattan Market Overview [Miller Samuel] [1] that I write for Prudential Douglas Elliman [PDE] [2] is available for download. I have been writing these market reports for them since 1994.

In addition, you can see the [methodology]) that went into the report including the neighborhood boundaries [3] and the type of content [4] we have available.

…The phenomenon of rising prices and declining sales is a classic sign of a market in transition. The market has entered a period where the sellers no longer have a clear advantage in the typical sales transaction. Buyers were expecting a deep discount on all transactions while sellers remained fairly firm in their pricing. As a result, the number of sales dropped as the buyers who were resistant to rising prices simply chose not to participate, while those who stayed in the market paid record prices on average. The modest uptick in mortgage rates since the beginning of the year tempered demand as both existing and new development inventory was rising. While inventory levels are the highest they have been in ten years, the selection for buyers has not improved as much as the inventory numbers would suggest as sellers have not yet responded to the weaker demand. There is still a substantial portion of listings that are priced as if the market was seeing double-digit annual appreciation that occurred over the past several years. As a result, it is taking longer to sell an apartment and there is generally more negotiability…