[The Westchester-Putnam Multiple Listing Service, Inc. [1] provides a quarterly analysis of the real estate market. Considered a suburb of New York City, Westchester County, NY [2] along with Fairfield County, CT, Northern New Jersey and Long Island are an important part of the New York City real estate market. A Matrix reader suggested I provide a summary each time the report is released by the MLS.]

Westchester County (remember Chappaqua [4], where President Clinton purchased?) is known for its higher end housing stock that serves as one of the primary markets to families that sell in the city and move to the suburbs. The second home market in New York has also benefited from empty-nesters who have sold their properties in Westchester and have moved to the city.

On the flip side, the county is also known for its high real estate taxes, its maximum security state prison, Sing Sing [5], and a nuclear power plant, Indian Point [6].

In reviewing the charts, I was struck by how high current sales levels actually are, how pricing appeared to drift sideways with some weakness during the year and how sharply inventory dropped, even though it is still higher than last year. 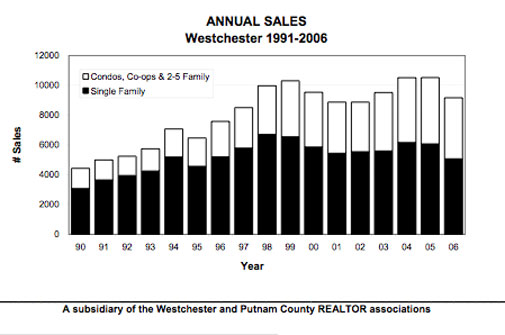 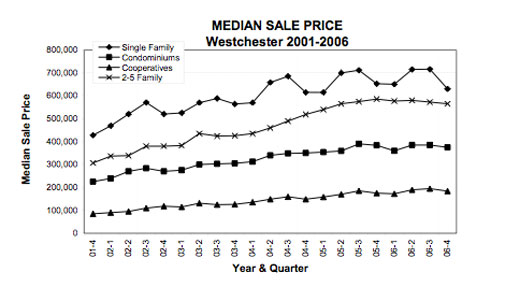 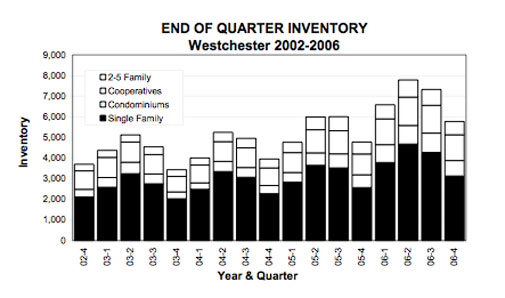 Here are excerpts from the report

Westchester’s multi-year run-up to record-high residential real estate sales and prices in 2005 abruptly halted in 2006. Realtors participating in the Westchester-Putnam Multiple Listing Service reported 9,167 closed sales in Westchester in 2006, a decrease of 13% from 2005. In Putnam County, the 1,001 sales for the year constituted a 23% decrease from 2005.

The signals of possible contraction in the local real estate market were evidenced in the seasonally adjusted data from as early as the third quarter of 2005. Nevertheless, the speed and depth of the contraction as it actually occurred early in the first quarter of 2006 caught the market by surprise, and the downturn persisted through the year.

The 2006 sales volume reset the market to levels last experienced in 2002 and 2003. Those were actually good years for real estate on an historical basis. However, Westchester’s overall backsliding of 13% in sales volume would have been greater were it not for the relatively moderate slowdown in the condominium and cooperative sectors in comparison to single family houses. Whereas house sales dropped nearly 17% from 2005 to 2006, condo sales decreased by less than 1%, and co-ops by only 9%.

Westchester’s year-end inventory of 5,774 units in all categories was 21% higher than at the end of 2005, and that percentage applied fairly uniformly among the major property types. In Putnam County there were 943 units available at the end of the year, a 15% increase from 2005.