David Berson, Chief Economist for Fannie Mae [1], in his weekly commentary discussed a possible sign that there was improvement in the jumbo mortgage market [2] because the spread between conforming and non-conforming mortgage rates was stabilizing, if not contracting. Jumbo mortgages are currently anything over $417,000. Mortgages at or below this threshold are considered conforming and are the type that GSE’s (government sponsored enterprises: Fannie Mae and Freddie Mac) can purchase from banks. This helps promote liquidity and lower mortgage rates throughout the country. 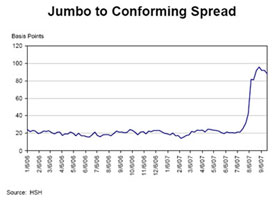 The problem with the credit markets (coming to a theatre near you: Mortgage Meltdown, Subprime Crisis, Credit Crunch) over the summer, was that investors came to the sudden realization that they did not know what loan products were actually in the portfolios they were buying. Did prime portfolios include slices of subprime or Alt-A in prime portfolios [3]? Apparently they did. In other words, the risk did not match the pricing being paid for these loans pools. Thats why American Home Mortgage, Countrywide and others ran into difficultly when selling their mortgage paper in order to free up capital to continue to lend.

Without the GSE’s, investors were especially reluctant to buy mortgage paper from jumbo mortgage originators and as a result, jumbo rates began to spike because it was harder to get a jumbo mortgage. (Fannie and Freddie by definition can’t buy their paper.) The lack of liquidity caused widespread concerns that mortgage money in higher priced housing markets would evaporate, causing housing prices to decline. No buyers, falling prices, etc. At the same time, I suspect the flight to safety seen in the financial markets was also seen in falling conforming mortgage rates to a certain degree. In fact, because of restrictions placed on the GSE’s last year due to the accounting scandal [4], they were forced to comply with a cap on the volume of mortgage paper they could buy and perhaps that may have eased the liquidity problem somewhat. Fannie and Feddie wanted to buy more mortgage paper but were not allowed to under these restrictions (The debate over raising the conforming mortgage rate or mortgage volume limit by GSE’s is for another post). 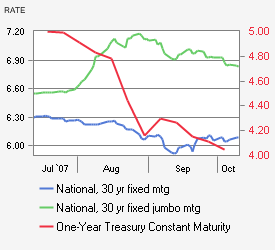 To this day, when I talk to agents, clients and appraisers in the field, there is still the impression that jumbo mortgages are scarce. Yet I have had conversations with chief credit officers at various national and regional lending institutions whom are all chomping at the bit (non-equestrian) that this is a sigificant opportunity to grab market share. In addition, jumbo mortgage rates are falling, indicating that that financing is available. However, the reality is that underwriting guidelines are actually being followed now rather than using exceptions as the basis, so it is still more difficult to get financing on marginal deals.

Its very, very early, but the contraction of spreads between conforming and non-conforming mortgages suggest that the mortgage investors are getting a getting a little more comfortable with what mortgage risks are out there and how they should be reflected in pricing, rather than simply waiting on the sidelines. After all, thats their business.