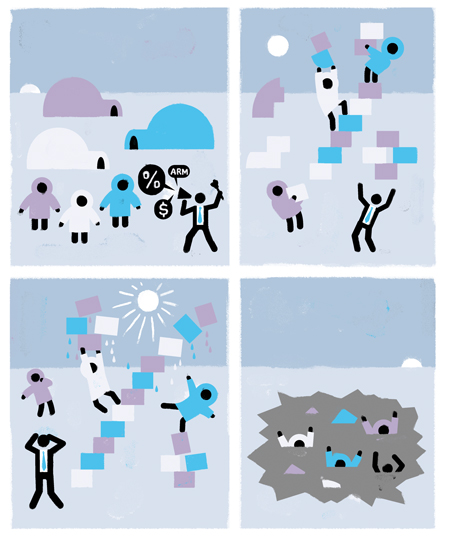 There is an absolutely spot-on article in the New York Magazine called Triple-A Failure: The Ratings Game [1]

I highly recommend that everyone read the article [1] from start to finish.

In 1996, Thomas Friedman, the New York Times columnist, remarked on “The NewsHour With Jim Lehrer” that there were two superpowers in the world — the United States and Moody’s bond-rating service

Essentially in their quest for profits, the agencies’ relationship with Wall Street changed from a mysterious and powerful ratings entity to a firm working closely with their clients.

Rating agencies (Moody’s, S&P, Fitch are the biggies) sought fees from investment banks to rate securities. If the ratings were too conservative, the bank could simply go to one of the other agencies to get the rating they wanted to. The agencies were essentially behind the curve in understanding the sophisticated new products being introduced at a rapid rate.

A few years ago, as I was getting more and more frustrated at the lack of neutrality in the mortgage lending process and the shaft given to good appraisers in the form of pressure, even an outsider like me could see that something was wrong with the relationship. The system can’t allow a ratings agency to be at the mercy of fee driven investment banks. The proverbial hand in the cookie jar.

By providing the mortgage industry with an entree to Wall Street, the agencies also transformed what had been among the sleepiest corners of finance. No longer did mortgage banks have to wait 10 or 20 or 30 years to get their money back from homeowners. Now they sold their loans into securitized pools and — their capital thus replenished — wrote new loans at a much quicker pace.

Mortgage volume surged; in 2006, it topped $2.5 trillion. Also, many more mortgages were issued to risky subprime borrowers. Almost all of those subprime loans ended up in securitized pools; indeed, the reason banks were willing to issue so many risky loans is that they could fob them off on Wall Street.

The search for new profits and their close relationship with Wall Street placed them in a non-neutral position yet investors were relying on the ratings.

Thus the agencies became the de facto watchdog over the mortgage industry. In a practical sense, it was Moody’s and Standard & Poor’s that set the credit standards that determined which loans Wall Street could repackage and, ultimately, which borrowers would qualify. Effectively, they did the job that was expected of banks and government regulators. And today, they are a central culprit in the mortgage bust, in which the total loss has been projected at $250 billion and possibly much more.

The agencies have a very big credibility problem right now with investors. It’s all about the lack of activity in the credit markets right now.

It’s certainly telling that the three ratings agencies and four major mortgage related associations took the position with Congress that the current administration’s suggestions for fixing the problem were flawed. [2] The Real Estate Roundtable, Mortgage Bankers Association, Commercial Mortgage Securities Association and the National Association of Realtors basically took the position not to do anything but teach investors how to, well…invest.

The credit markets are currently frozen because of the lack of neutrality in the rating and mortgage process, not because investors are ignorant. Next thing we will start hearing is that the agencies and associations will simply self-police.

Fear of change, living in denial.