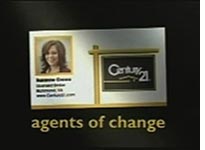 The other night, my wife and I were watching television (no, not American Idol) and we watched a Century 21 commercial. When it was over, we looked at each other and said…”What?!?!”

Its the one where the wife and the agent, who is listening in on a speaker phone, hard sells the virtues of buying the house to the husband.

This commercial is wrong in so many ways.

UPDATE: Apparently we owe a big hat tip to russellarch [2] since he was the source link for the Slate article on this video and Slate didn’t credit him nor did I when I posted the link!

Seth Stevenson gives the lowdown in his post: The Nastiest Wife on Television: An odd new ad from Century 21 [Slate] [3].

It promotes the hard sell techniques of a broker. The wife and broker are ganging up on the husband. The broker was listening into an intimate, life changing moment for the couple. The husband determines whether they buy the house and appears to be pretty shallow, etc. etc.

This doesn’t seem to be the message that the advertisement should convey, does it?