I recently got a copy of The Effects of Inclusionary Zoning on Local Housing Markets: Lessons from the San Francisco, Washington DC and Suburban Boston Areas [1] researched by Jenny Schuetz, Rachel Meltzer, and Vicki Been of the Furman Center for Real Estate and Urban Policy at New York University. I have had the pleasure of knowing Vicki Been and the good work of the Furman Center. Last summer I had honor of having a paper I co-authored with the Furman Center back in 2003 published in the Journal of Legal Studies [2].

I’ve always been intrigued by the influence of zoning on housing: why a town or neighborhood has a consistent housing stock, higher end type of property, limited multi-unit dwellings, limited of commercial space, (let alone the lack of chain-link fences, a key source of suburban blight).

Zoning tends to be exclusion based to keep affordable housing out of specific areas and has a lot to due with whether a housing market is higher priced in certain markets and not in others.

Inclusionary zoning [3], also known as inclusionary housing, refers to municipal and county planning ordinances that require that a given share of new construction be affordable to people with low to moderate incomes. 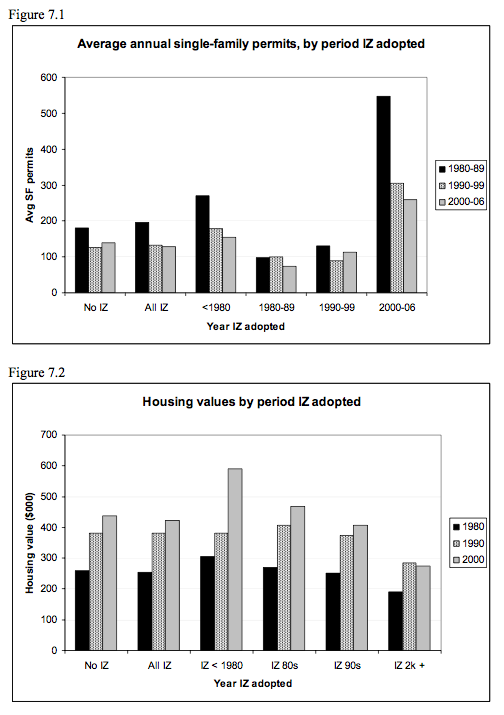 the average annual number of single-family permits issued during the 1980s, 1990s and since 2000. As shown in the first two groups, the changes in annual permits since 1980 are quite similar when comparing all jurisdictions that had not adopted IZ by 2006 and all those that had adopted IZ at some point. However, this comparison obscures considerable variation among jurisdictions with IZ, as shown in the last four groups of columns. In particular, those jurisdictions that adopted IZ prior to 1980 or after 2000 issued substantially more permits, both before and after adoption, than jurisdictions that adopted IZ in the 1980s and 1990s. The most recent adopters seem to have been developing much more rapidly in the early decades and saw dramatic drops in the number of permits, even before adopting IZ.

Although less pronounced, there is also considerable variation in changes in housing prices among jurisdictions with IZ (Figure 7.2). Jurisdictions that adopted IZ prior to 1980 had higher than average housing prices as early as 1980 and have seen some of the sharpest increases in prices between 1980 and 2000. This would be consistent with either the explanation that IZ resulted in higher prices in those locations, or that jurisdictions with strong location-specific demand were some of the first to adopt IZ. As of 1980, jurisdictions that adopted IZ in the 1980s and 1990s more closely resembled those that have never adopted IZ, and have seen price increases roughly comparable to the non-IZ group since then. The most recent adopters, which had some of the lowest housing prices at the beginning of our study period, have seen relatively modest price increases, and in 2000 were still relatively affordable.

Such zoning can be controversial. It is often done without public funds and can promote economic and racial integration, but can restrict development of open market properties, creating higher priced housing, reducing affordability.

While you’re at it, take a look at The Effect of Community Gardens on Neighboring Property by Vicki, and my co-author Ioan Voicu. Interesting stuff.