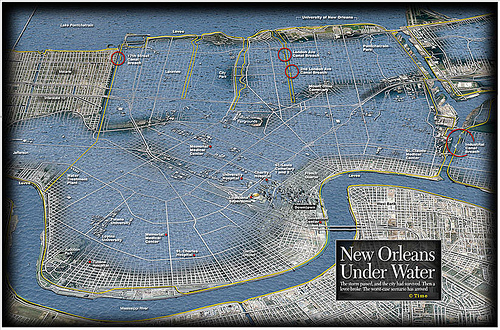 Can we imagine a country without New Orleans? One could argue it will never be the same. Of course this story is not running on CNN all day so public interest in the devastation appears to be waning.

The housing.com post FEMAVille Update [1] makes the point if many of the developers jockeying for reconstruction rights get their way, the whole Gulf Coast may end up not resembling anything like its old self. [NYT] [2]

FEMA is could cut its federal obligation by counting as in-kind contributions if a proposed law if adopted. [Louisiana Weekly] [3]

I know of an appraiser in New Orleans who lost all of her investment properties – wiped clean off their foundations. How long will they take to be rebuilt, if ever? FEMA wants the properties rebuilt higher off the ground and sturdier. There are many who simply want to rebuild it the way it was [NYT]. [5]

Whats the best way to proceed? Its not clear to me what the best course of action is. To simply rebuild the levees to withstand category 3 storms proved to be ineffective and costly in terms of lives and resources. To rebuild at category 5 or 6 strength is signficantly more expensive and would take years. FEMA has encouraged development in flood plains by providing (subsidizing) low cost flood insurance [Matrix] [6] that encourages construction in low lying areas.