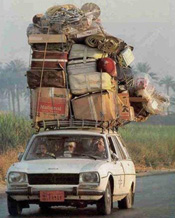 There has been a barrage of data released over the past two days and all seem to point in the same direction…down. However, its seems like a see-saw rather than a cohesive trend. Granted, the real estate related economic news is definitely not positive, but there is an awful lot of creedence placed on national statistics that is applied local markets as gospel. For example, if you own a stock, and the Dow Jones Industrial Average goes down that day, you may feel down even though the behavior of the DJIA may have no correlation to your own stock. National statistics are released monthly for the most part and it takes 3-5 months of consistent patterns before a trend becomes recognized by the masses. There’s enough of a dataset for monthly stats, but does a month to month change tell us much?

Here’s my issue with this barrage of information:

Here’s the barrage of monthly economic data from the past few days (it occurs about this time every month):