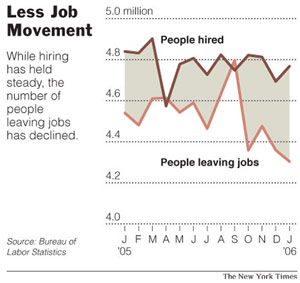 The encouraging employment data that came out this month prompted some discussion about inflationary pressures. While not serious, there is concern that an economy that is seeing strong employment gains, will stimulate further interest rate gains, which does not bode well for housing.

The work force has been growing steadily lately in the article: Another Month of Jobs Growth? Not So Fast [NYT] [1], at a pace of around 200,000 people per month and Wall Street takes this as a sign of a healthy job growth reflects a robust economy requiring more workers to meet rising demand. If hourly wages have also been rising, as they have been recently, and the unemployment rate is low, as it has been, then the forecasters say that demand for labor may be giving workers leverage to insist on higher pay. As pay rises, this reasoning goes, so might prices, which means higher inflation.

Well apparently, the data is very misleading, suggesting the economy is doing better than it actually is.

Another report, which follows a month behind the employment report so it doesn;t get much attention is awkwardly titled the Job Openings and Labor Turnover Survey and referred to by its acronym, JOLTS.

Whats actually happening is that employers have not been hiring more, but rather people have not been leaving their jobs. Hiring has been flat.

This information helps to explain the employment report. It shows that employers as a group are hiring roughly the same number of people each month while fewer employees depart. That combination swells the work force. It’s a much less bullish story than the monthly employment report suggests on its own.

The confusion in interpretation of the data is apparent in Barry Riholtz’s post How Have Economic Reports Been Running? [Big Picture] [2] based on a post at Ticker Sense [3].

_Here’s two other links that cover the reliability of government statistics:_