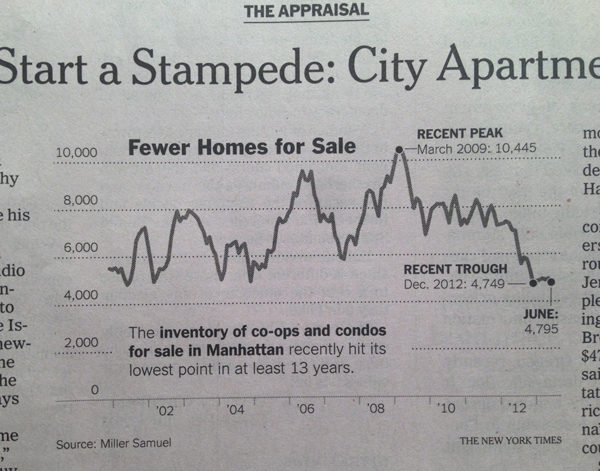 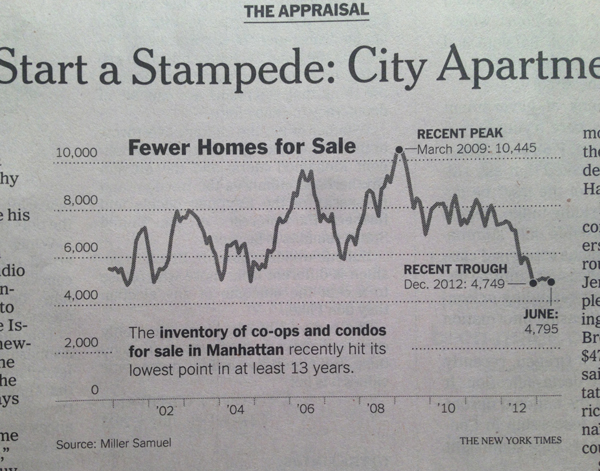 This morning I noticed a quote I had made in an earlier piece this week was one of two quotes selected for “The Chatter” on page 2 of the NYT SundayBusiness section [2].

“No supply means frenzy, and it means prices rise.”

Forgive this exercise in narcissism but I learned a few things from the process.

Today’s quote mention gave me pause and since I’m midway through our quarterly market report gauntlet [3] I thought I’d take a quick moment to comment on the thrill I experienced this past Tuesday contributing to Liz Harris’ cover story on housing market inventory (lack thereof). It was titled Words to Start a Stampede: New York Apartment for Sale [4]. Liz writes an excellent weekly column with clearly the best title in all of journalism: The Appraisal [5].

On Tuesday (7/2) I was initially contacted for the piece, beginning a weeklong period of handwringing. At that time I was told it would run on Saturday’s cover (7/6) which seemed like a long time away. However the topic is evergreen (not time sensitive to the day) so it was likely “on the bubble” (pun sort of intended) if any last minute breaking news appeared.

On Friday afternoon (7/5) I learned that Saturday was pushed to Sunday to make room for the crisis in Egypt [4].

Late Saturday (7/6) evening I learned that Sunday was pushed to Monday to make room for the plane crash at SFO airport. [6]

Late Sunday (7/7) evening I was told that Monday was pulled because former NY governor Eliot Spitzer announced his candidacy for NYC Comptroller [7] and no word on whether it would appear in Tuesday’s edition.

On Monday (7/8) I was clearly hoping for a slow news day so the piece wouldn’t get bumped a fourth time so every news alert required my attention. By the time Monday afternoon rolled around, the article suddenly appeared online so I became confident it would never make the cover – but no page number was assigned to a print page.

The online article appeared on the NYT “Most Popular” page [8], reaching 13th place quickly soon after it was posted and rapidly ascended to number 4, finally surpassing the very popular article about stool [9].

I assume this was a way for the NYT to test via crowd sourcing how relevant this story was to deserve a spot on page one. The online article jumped to 2nd place, then 1st on the most emailed list so I began to feel confident that this was the feedback the editors needed. …and we were still ahead of the stool article.

Late on Monday evening the online article was appended by the following notation at the bottom of the page:

“A version of this article appeared in print on July 9, 2013, on page A1 of the New York edition with the headline: Words to Start a Stampede: New York Apartment for Sale.”

On Tuesday morning (7/9) my parents texted me at 6:08am to say they saw the printed version in their town drug store. The article actually made both the NY Metro edition and the US edition so I could share the fun with my relatives outside the NYC area, where social norms are a lot less obsessive about real estate.

Ok, back to work.