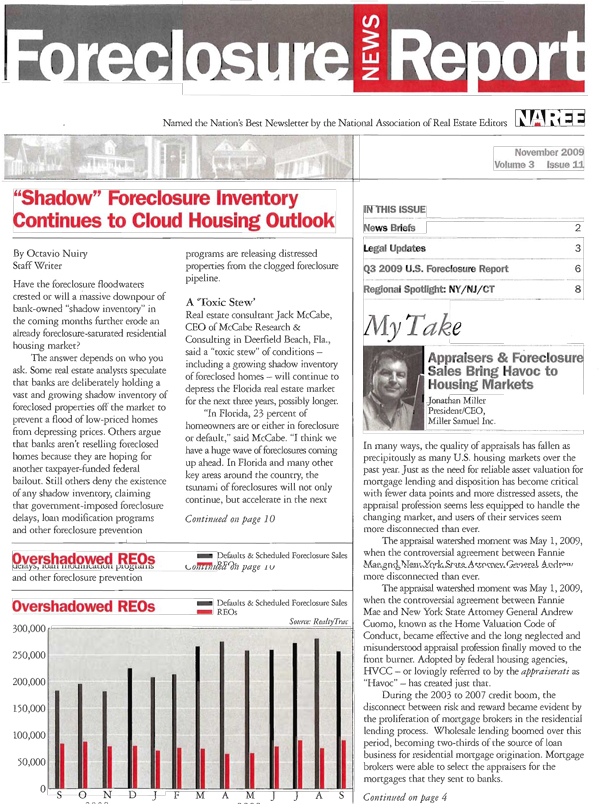 I authored the following article for RealtyTrac [1] which appeared on the cover of their November 2009 subscriber newsletter called Foreclosure News Report. It features a column for guest experts called “My Take.”

When Rick Sharga [2] invited to write the article, he provided the previous issue which featured a great article by Karl Case of the Case Shiller Index and I was sold.

I hope you enjoy it.

In many ways, the quality of appraisals has fallen as precipitously as many US housing markets over the past year. Just as the need for reliable asset valuation for mortgage lending and disposition has become critical (fewer data points and more distressed assets) the appraisal profession seems less equipped to handle it and users of their services seem more disconnected than ever.

The appraisal watershed moment was May 1, 2009, when the controversial agreement between Fannie Mae and New York State Attorney General Andrew Cuomo, known as the Home Valuation Code of Conduct, became effective and the long neglected and misunderstood appraisal profession finally moved to the front burner. Adopted by federal housing agencies, HVCC, or lovingly referred to by the appraiserati as “Havoc” and has created just that.

During the 2003 to 2007 credit boom, a measure of the disconnect between risk and reward became evident by the proliferation of mortgage brokers in the residential lending process. Wholesale lending boomed over this period, becoming two thirds of the source of loan business for residential mortgage origination. Mortgage brokers were able to select the appraisers for the mortgages that they sent to banks.

Despite the fact that there are reputable mortgage brokers, this relationship is a fundamental flaw in the lending process since the mortgage broker is only paid when and if the loan closes. The same lack of separation existed and still exists between rating agencies and investment banks that aggressively sought out AAA ratings for their mortgage securitization products. Rating agencies acceded to their client’s wishes in the name of generating more revenue.

As evidence of the systemic defect, appraisers who were magically able to appraise a property high enough to make the deal work despite the market value of that locale, thrived in this environment. Lenders were in “don’t ask, don’t tell” mode and they could package and sell off those mortgages to investors who didn’t seem to care about the value of the mortgage collateral either. Banks closed their appraisal review departments nationwide which had served to buffer appraisers from the bank sales functions because appraisal departments were viewed as cost centers.

The residential appraisal profession evolved into an army of “form-fillers” and “deal-enablers” as the insular protection of appraisal professionals was removed. Appraisers were subjected to enormous direct and indirect pressure from bank loan officers and mortgage brokers for results. “No play, no pay” became the silent engine driving large volumes of business to the newly empowered valuation force. The modern residential appraiser became known as the “ten-percenter” because many appraisals reported values of ten percent more than the sales price or borrower’s estimated value. They did this to give the lender more flexibility and were rewarded with more business.

HVCC now prevents mortgage brokers from ordering appraisals for mortgages where the lender plans on selling them to Fannie Mae or Freddie Mac which is a decidedly positive move towards protecting the neutrality of the appraiser. Most benefits of removing the mortgage broker from the appraisal process are lost because HVCC has enabled an unregulated institution known as appraisal management companies to push large volumes of appraisals on those who bid the lowest and turn around the reports the quickest. Stories about of out of market appraisers doing 10-12 assignments in 24 hours are increasingly common. How much market analysis is physical possible with that sort of volume?

After severing relationships with local appraisers by closing in-house appraisal departments and becoming dependent on mortgage brokers for the appraisal, banks have turned to AMC’s for the majority of their appraisal order volume for mortgage lending.

Appraisal management companies are the middlemen in the process, collecting the same or higher fee for an appraisal assignment and finding appraisers who will work for wages as low as half the prevailing market rate who need to complete assignments in one-fifth the typical turnaround time. You can see how this leads to the reduction in reliability.

The appraisal profession therefore remains an important component in the systemic breakdown of the mortgage lending process and is part of the reason why we are seeing 300,000 foreclosures per month.

The National Association of Realtors and The National Association of Home Builders were among the first organizations to notice the growing problem of “low appraisals”. The dramatic deterioration in appraisal quality swung the valuation bias from high to low. The low valuation bias does not refer to declining housing market conditions. Despite mortgage lending being an important part of their business, many banks aren’t thrilled to provide mortgages in declining housing markets with rising unemployment and looming losses in commercial real estate, auto loans, credit cards and others. Low valuations have essentially been encouraged by rewarding those very appraisers with more assignments. Think of the low bias in valuation as informal risk management. The caliber and condition of the appraisal environment had deteriorated so rapidly to the point where it may now be slowing the recovery of the housing market.

One of the criticisms of appraisers today is that they are using comparable sales commonly referred to as “comps” that include foreclosure sales. Are these sales an arm’s length transaction between a fully informed buyer and seller is problematic at best. While this is a valid concern, the problem often pertains to the actual or perceived condition of the foreclosure sales and their respective marketing times.

In many cases, foreclosure sales are marketed more quickly than competing sales. The lender is not interested in being a landlord and wants to recoup the mortgage amount as soon as possible. Often referred to as quicksale value, foreclosure listings can be priced to sell faster than normal marketing times, typically in 60 to 90 days.

The idea that foreclosure sales are priced lower than non-foreclosure properties is usually confused with the disparity in condition and marketing times and those reasons therefore are thought to invalidate them for use as comps by appraisers.

Foreclosure sales can be used as comps but the issue is really more about how those comps are adjusted for their differing amenities.

If two listings in the same neighborhood are essentially identical in physical characteristics like square footage, style, number of bedrooms, and one is a foreclosure property, then the foreclosure listing price will often set the market for that type of property. In many cases, the lower price that foreclosure sales establish are a function of difference in condition or the fact that the bank wishes to sell faster than market conditions will normally allow.

Throw in a form-filler mentality enabled by HVCC and differences such as condition, marketing time, market concentration and trends are often not considered in the appraisal, resulting in inaccurate valuations. As a market phenomenon, the lower caliber of appraisers has unfairly restricted the flow of sales activity, impeding the housing recovery nationwide.

In response to the HVCC backlash, the House Financial Services Committee added an amendment to the Consumer Financial Protection Agency Act HR 3126 on October 21st which among other things, wants all federal agencies to start accepting appraisals ordered through mortgage brokers in order to save the consumer money.

If this amendment is adopted by the US House of Representatives and US Senate and becomes law, its deja vu all over again. The Appraisal Institute, in their rightful obsession with getting rid of HVCC, has erred in viewing such an amendment as a victory for consumers. One of the reasons HVCC was established was in response to the problems created by the relationship between appraisers and mortgage brokers. Unfortunately, by solving one problem, it created other problems and returning to the ways of old is a giant step backwards.

We are in the midst of the greatest credit crunch since the Great Depression and yet few seem to understand the importance of neutral valuation of collateral so banks can make informed lending decisions. Appraisers need to be competent enough to make informed decisions about whether foreclosures sales are properly used comps. For the time being, many are not.