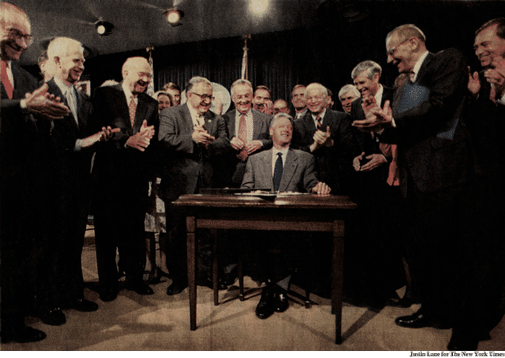 There has been a lot of debate on whether the repeal of Glass-Steagall [1] on November 13, 1999 via the Gramm-Leach-Bliley Financial Services Modernization Act [2] was the beginning of the end of the separation of financial church and state. The Glass-Steagall Act, also known as the Banking Act of 1933 [1] was created to prevent commercial banks from entering the investment bank business.

If you’ve been abducted by aliens for the past three weeks, here’s a great way to catch up on the bailout [3].

And when you are caught up (assuming the alien thing was accurate), here’s a once in a while requirement from Matrix. A required reading assignment: What’s Free About Free Enterprise? [4]

The first is the risk of moral hazard within the bailout itself. That is, if government is going to make good so many losses throughout the system, why would anyone set limits on future risk-taking? The situation could turn into a free-for-all that makes the recent disregard of risk look like child’s play.

The second problem is more philosophical, involving what the bailout plan reveals about the functioning of the free enterprise system. This raises disturbing questions. Although I agree with President Bush’s observation that “the risk of not acting would be far higher,” we should be aware of the secondary effects of what we are getting into.

Analysis of an IMF study on bank failures [5] shows that the average recovery rate in a banking crisis averaged just 18 percent of the gross costs. Barrons seems to think the taxpayer will come out ahead [6].

Not everyone thinks the bailout is a great idea [7].

I should add, though, that I don’t think the people spearheading the bailout have a clear idea about what they’re doing either. They remind me of the old saying: “Something must be done. This is something. Therefore this must be done.” I’m a former student of Chairman Ben Bernanke and his behavior during this mess has been a big disappointment.

Robert Shiller writes an opinion piece in the Washington Post this weekend telling everyone to calm down – government intervention is not unusual and not a bad thing. Everybody Calm Down. A Government Hand In the Economy Is as Old as the Republic. [8] He makes the argument that capitalism evolves and is not etched in stone. He makes a compelling argument.

Megan McArdle in The Atlantic says its not about the Glass-Steagall repeal [9] at all because securitization has been around for a while and Gramm Leach didn’t impact lending standards at commercial banks, among other items.

But Dan Gross at Slate [10] and Newsweek says that the repeal is the end of an era and perhaps infers, that it caused the situation we are in today.

The policy response was to erect a wall between investment banking and commercial banking. It outlasted the Berlin Wall by a few decades. In the 1990s, as another bull market took hold, momentum built to overturn Glass-Steagall. Commercial banks were eager to get into high-margin businesses like underwriting hot tech stocks. Brokerage firms saw commercial banks, with their massive customer bases, as great distribution channels for stocks, mutual funds, and other financial products that they created. Generally speaking, the investment banks were the aggressors.

While I don’t blame the credit carnage all on the repeal of Glass-Steagall, it sure is a compelling milestone and played a role. Banks and investment banks had blurred lines of distinction and regulators were no match for the investment banks. Of course, JPMorgan Chase, who seems to be coming up roses with recent mopup efforts, was the merger of an investment bank and a commercial bank.

The mindset was free markets need to be free because market forces were self-regulating. Of course, that purist view may very well have caused one of the most constraining regulatory environments in the modern era going forward.