The Federal Reserve released its anecdotal analysis of the overall economy this week [Bloomberg]. [1] It is the first report completed since the double hurricane barrage of bad fortune in September.

The housing market, while remaining ‘generally strong,’ showed more signs of cooling in other areas, the survey said. The New York and Boston districts said homes were sitting on the market longer, while inventories of homes for sale increased in the Chicago and Kansas City regions. Demand for office, retail or industrial real estate increased in all areas, the Fed said.

The Fed intends to continue raising short term rates at a “measured pace.” Immediately after the hurricanes, it was generally thought that the Fed may ease in its attempts to reign in inflation as the economy felt the drag of hurricanes. However, this was short lived. Rising wages and gasoline prices continue to raise inflationary concerns. 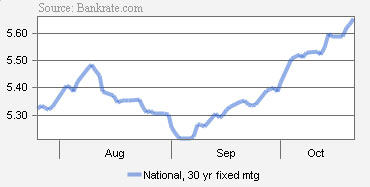 As a result, mortgage rates have continued to trend upward.

The next Beige Book is scheduled for release on November 30, 2005.