On Wednesday, Bernanke was sworn in as the 14th Fed Chairman [1] so his first full day is…you guessed it…Groundhog Day [2] 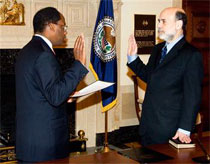 After all, Bernanke’s got much better credentials then Punxsutawney Phil.

[Webmaster’s apology: Sorry, it was a late night post.]