This series was born out of the growing number of news stories covering past mortgage lending practices and suggests no one is to blame or, ehem, everyone is to blame. Suggested solutions are few and far between. For the record, I blame society. Ok, not really, but there’s still plenty of blame left to to go around (and solutions). Here’s another example… 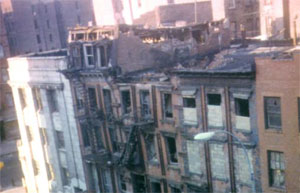 With a weakening economy, cities are beginning to go after lenders because of shrinking tax revenues and rising costs associated with foreclosures. Here are a few examples:

Cleveland
The City of Cleveland is suing 21 major banks and mortgage companies [1] for the damage left behind after subprime mortgage debacle. Ohio has been particularly aggressive [2] in going after mortgage related professionals [3] who were “morally flexible” in making money during the recent housing boom. Left in its wake is the re-emergence of urban blight, as a thousands of homes have gone into foreclosure and have been abandoned. Rising crime, lost tax revenue, demolition costs, etc.

Baltimore
But lets not forget about the City of Baltimore, who is suing Wells Fargo [4] for poor lending practices:

The recent surge in homeowner defaults nationwide, generated by lax lending practices during the real estate boom, has officials bracing for a range of problems that often accompany foreclosures. Some municipalities, including Cleveland and Buffalo, are trying to make lenders responsible for abandoned properties to ward off crimes like arson, drug use and prostitution.

But the civil suit that officials in Baltimore are filing in United States District Court may presage another type of litigation against lenders by municipalities facing shortfalls in their budgets.

Buffalo
Rust belt cities, to add to their economic weakness, now have to deal with urban blight. It looks a like a lot of lawsuits are on the horizon [5].

the forefront of a pioneering effort to deal with a vexing problem: The surging number of vacant and abandoned homes resulting from the mortgage market meltdown. The vacancies occur when lenders bring foreclosure suits against delinquent borrowers. Mere notice that such an action might be filed often sends residents packing. In Buffalo and other Rust Belt cities, the problem has been particularly acute, because in many cases banks are abandoning the houses, too, after determining that their value is so low that it’s not worth laying claim to them.