A quick shout out to Sam Chandan [1] at Real Estate Econometrics [2] for his invite to me to speak to his MBA real estate class at Wharton last Monday. A lot of fun and no tomatoes thrown. Added bonus, they have Au Bon Pain as snack shop. 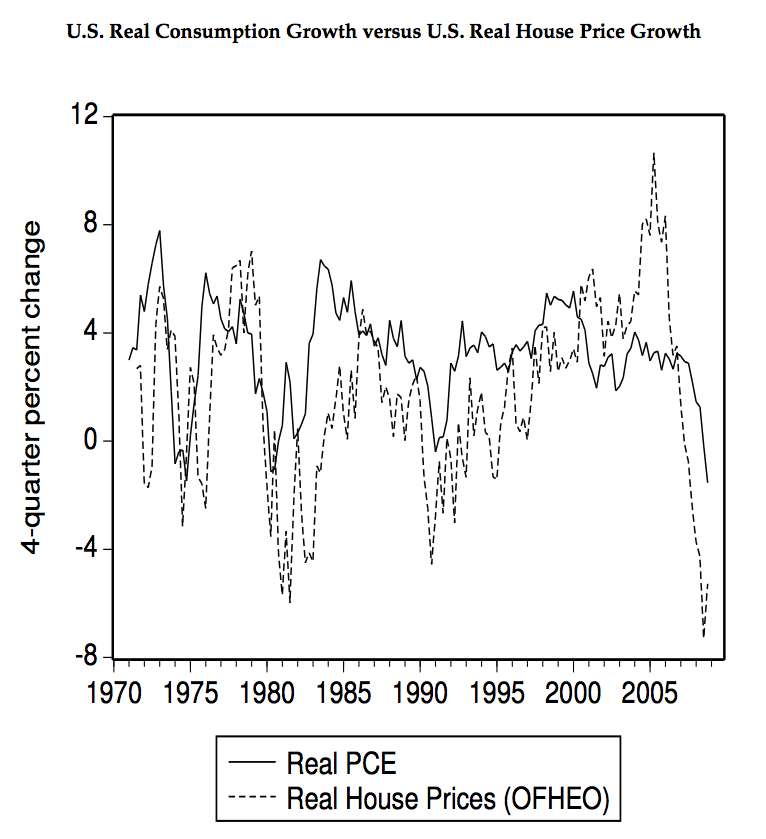 The widely held belief that houses were used as ATM’s during the credit boom is a valid assumption given the massive withdrawal of home equity. Of course that parallels mortgage lending and as a result, housing activity boomed over the same period.

With the post-Lehman credit crunch, millions of homeowners can’t refinance their mortgages or obtain a mortgage for a purchase. The contraction in credit has choked off the high pace of sales activity our economy has grown accustomed too. Yet sales and prices appear to be leveling off after a steady decline.

Q: Who’s buying these homes?
A: People that can actually afford and qualify for a mortgage.

According to a recent public policy discussion paper from the Federal Reserve Bank of Boston by Daniel Cooper Impending U.S. Spending Bust? The Role of Housing Wealth as Borrowing Collateral [3]

house values affect consumption by serving as collateral for households to borrow against to smooth their spending….house values, however, have little effect on the expenditures of households who do not need to borrow to finance their consumption.

In other words, the segment of the consumer market that needs to borrow to spend, aren’t spending now. That doesn’t mean “no one is spending” – this is the cause for significant confusion in interpreting the health of our current economy.

For those who borrow to spend

The results show that the consumption of households who need to borrow against their home equity increases by roughly 11 cents per $1.00 increase in their housing wealth.

During the housing boom, the excess demand was simply fueled by those who had to excessively borrow to spend. It doesn’t mean that everyone had the same thinking.