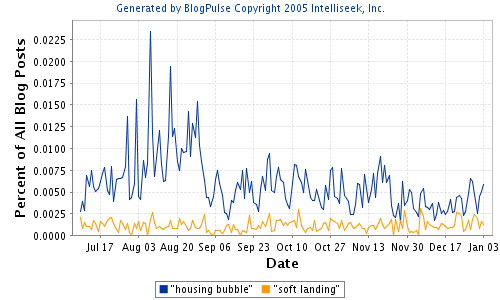 For all the talk about a housing bubble this past summer, blog chatter continues to decline to the point it is approaching a soft landing.

Big Media’s use of “bubble speak” appears to be declining even faster and is switching to the use of “soft landing”, especially as the Fed has signalled it may be nearing its measured pace of federal funds increases. Wondering if we will see “soft landing” named blogs in response to this new change similar to the proliferation of “bubble blogs [1]” last year.

Waiting for a Soft Landing [Washington Post] [2]
…All this good news is, of course, bad for the news business. The sunny predictions suggest two familiar economic catchphrases: “soft landing” and “Goldilocks economy.” The Federal Reserve stops raising interest rates before it causes a recession; that’s the soft landing. Economic growth is then fast enough to keep unemployment low and not so fast as to trigger higher inflation; that’s the Goldilocks economy, not too hot or too cold….

A Soft Landing in the New Year [Barron’s] [3]
… the economy was entering the early stage of a necessary adjustment process. Housing market indicators have shifted from being uniformly strong to showing a more mixed picture. This confirms that the housing sector has passed its peak, but leaves open the question of how much of a slowdown is likely and how it will impact consumer spending….

2006 economy looks solid [USA Today] [4]
… it would take several major shocks, not just one, to send the global economy into a recession. For his part, he sees a soft landing for the housing market, rather than a plunge in home prices…

Real estate market is like a ‘balloon,’ says economist [Inman] [5]
…The forecast, “Housing Market: A Slowdown, Not a Meltdown,” which is based on data from the California Association of Realtors trade group and the Office of Federal Housing Enterprise Oversight, concludes that “the housing market is headed for a soft landing.”…

Home sales’ fall seen as sign of soft landing [AP] [6]
…either way, analysts read two economic reports yesterday as indicating a soft landing for the housing sector, which has been flying high in some parts of the country, and a smoother ride for the labor market…