I have been coming across what I believe to be somewhat weird rear view looks at the credit/housing bubble we just went through from some well respected voices. I’m thinking there is perhaps an academia disconnect from the front lines. 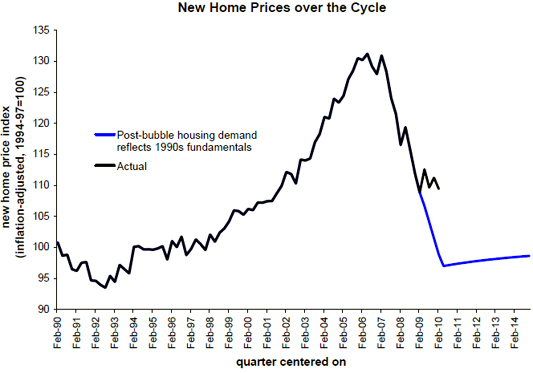 Casey B. Mulligan is an economics professor at the University of Chicago writes “Was it really a bubble? [1]“

According to the bubble theory, for a while the market was overcome with exuberance, meaning that people were paying much more for housing than changes in incomes, demographics, technology and other basic factors would suggest.

But why would the blue line need to be where it is? Housing prices are stickier on the downside and the slope should not form a bell curve as the drawing suggests. It should be a lesser slope and drawn out over several years, shouldn’t it? And wasn’t that the whole point of the stimulus plan in reference to the first time home buyers’ and existing homeowner’s tax credit? It stimulated sales activity and as a result, artificially pushed sales price levels sideways.

Take a look at my colleague at Westwood Capital, Dan Alpert’s chart showing the exuberance of housing prices. You can slice it and dice anyway you want but THAT’s a bubble. 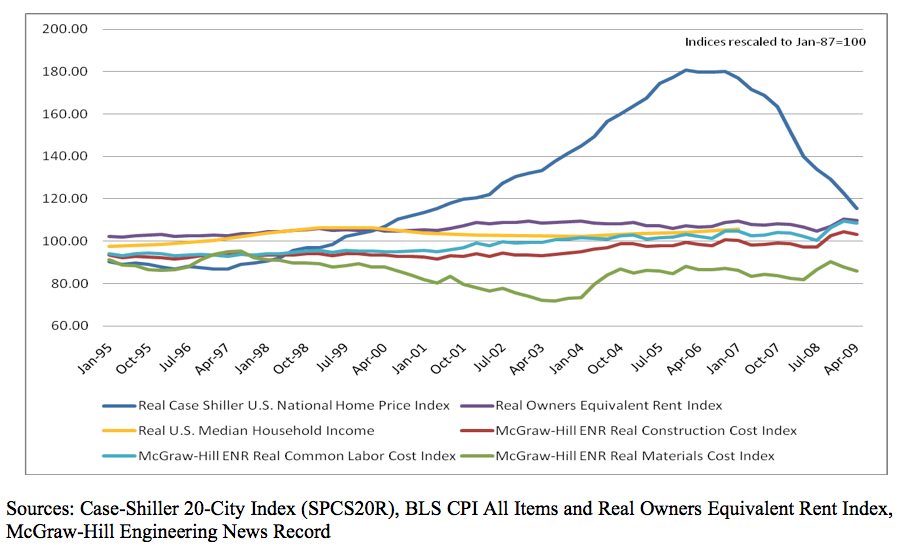 And one of my favorite economist/writers Edward Glaeser writes “What Caused the Great Housing Maelstrom? [3]“

If the easy credit hypothesis is correct, then we can take comfort in the thought that we understand the great housing convulsion, and we can start pointing fingers at those institutions, like the Federal Reserve System, that play a role in determining interest rates.

He and his colleagues through their research seem to be saying that low interest rates and high lending approval rates don’t explain enough of the rise in housing prices.

In all due respect, I don’t know exactly how they proved their points empirically but this research seems to be a bit disconnected to what most of us observed on the ground during the boom itself.

That seems like a very low ratio to me. As appraisers we could clearly see the pressure we were under to hit the number for the mortgage approval and that most people were placing 5%-10% down. I contend that credit was easier than anytime in modern history and that combined with interest rates kept on the floor from late 2001 to mid 2004 caused a frenzy of demand or as Professor Robert Shiller characterizes it as “Irrational Exuberance.”

This was a credit bubble and that housing was merely a way to keep score. Perhaps I am not following their logic but having lived through it and saw the lending environment first hand, its hard to imagine this whirlwind of the past 7 years was not a bubble of some kind.