The Commerce Department released its new residential construction stats [1] and starts are down 28.4% below last year and permits are down 36.5%. This is consistent with the NAHB Builder Confidence stats released the day before: 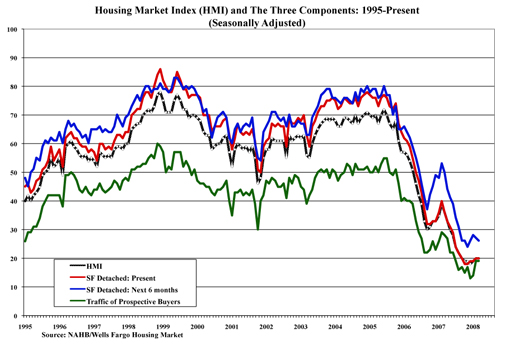 I find it interesting to follow trade associations like the National Association of Homebuilders (NAHB) [2], and observe how they present their take on the housing market. In one of the worst environments for construction in recent memory (hard to find either financing and buyers), optimism still prevails:

“Our surveys confirm what I’ve been hearing personally from builders across the country, which is that interested buyers are out there, but they are either reluctant to go ahead with a home purchase or they are unable to find mortgage financing they can afford,” said NAHB President Sandy Dunn, a home builder from Point Pleasant, W. Va.

I am guessing this is an understatement of the year, no?

The headline of the press release says: Builder Confidence Remains Unchanged In March. [3]

Which makes it sound like a neutral market when actually confidence is almost at its lowest level in 23 years since the index has been published. Yes?

Builder confidence in the market for new single-family homes remained unchanged in March, according to the latest NAHB/Wells Fargo Housing Market Index (HMI), released today. The HMI held firm at 20, which is near its historic low of 18 set in December of 2007 (the series began in January of 1985).

To their credit, they provide constructive suggestions to fix the housing slump and even though there is sugar coating (they are a trade association, after all), they do not stray from the realities of the market. No?

This just in: NAR Chief Economist Named Among Top Forecasters for Accuracy. [4] ????