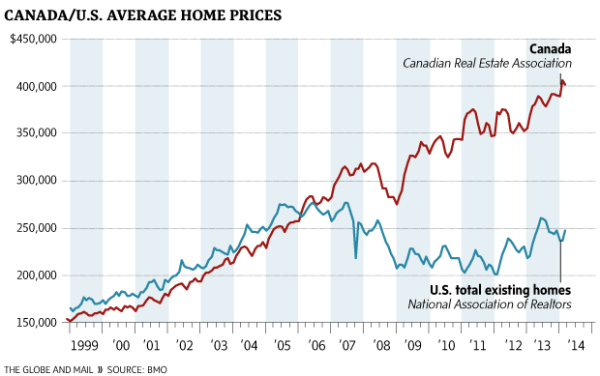 I was reading Tara Perkin’s piece in The Globe and Mail about the record price spread between the US and Canadian housing markets [1] and saw one of the most startling housing charts of late (above). To be clear, this chart doesn’t adjust for the exchange rate but the article says the Canadian/US existing home price spread would be large – closer to 50% than 66% – still huge.

“The main takeaway is that, contrary to all expectations, the Canadian housing market has just kept on rolling in 2014 even as the U.S. housing market has paused for breath (after a steep climb out of the dungeon),” he writes in a research note. “Put it this way, how many pundits a year ago were calling for Canadian home prices to rise faster than their U.S. counterparts in any single measure?”

Yes, true, but this is probably another good reason not to rely on anything published by a lender’s “chief economist” title due to their inherent bias toward the interests of their employer. What I find fascinating about the Canadian housing market is the proliferation of the false rationale that prices are being used as a measure of housing health. For the US counterpart, think Miami and Las Vegas circa 2005 when prices were skyrocketing and sales were falling.

The Canadian government tightened credit conditions a year ago and sales fell sharply:

This time last year it was far from clear when and if the Canadian housing market would emerge from the sales slump that ensued after former Finance Minister Jim Flaherty tightened the country’s mortgage insurance rules. 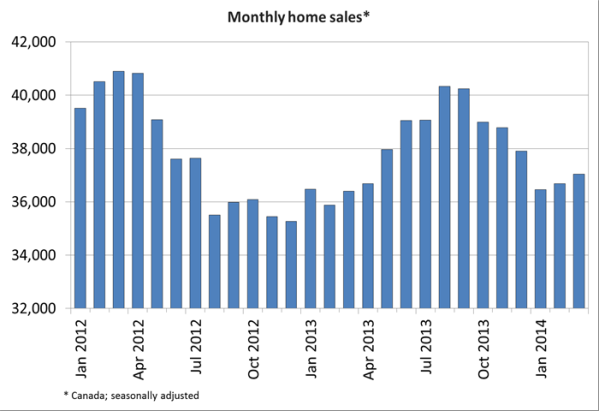 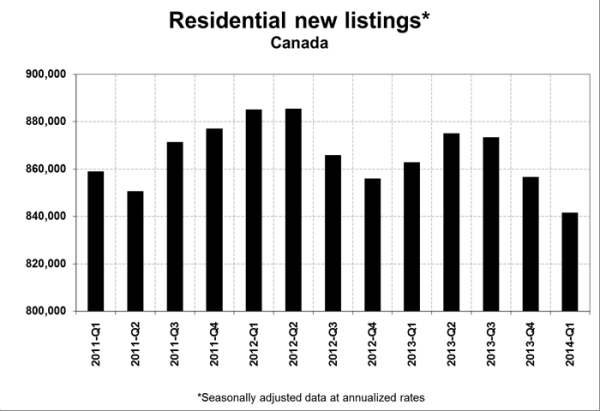 The Greater Fool Theory [4] Applies to the Canadian Housing Market

A theory that states it is possible to make money by buying securities, whether overvalued or not, and later selling them at a profit because there will always be someone (a bigger or greater fool) who is willing to pay the higher price.

Please stop using housing prices as a measure of housing health. It was obviously flawed logic when applied in the US during 2003-2006 and now it has become apparent it was flawed during the 2012 to 2013 US run up.