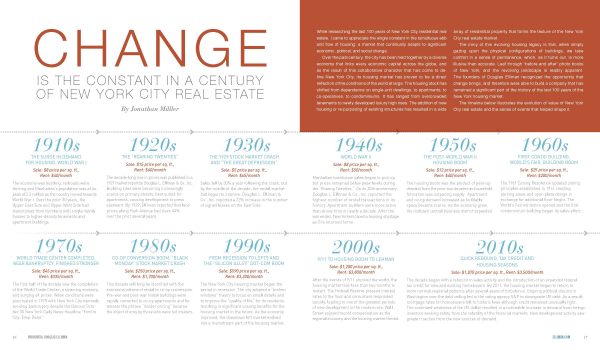 Last fall Prudential Douglas Elliman [2] turned 100 years old and they asked me to write an article for their Elliman magazine. If you’ve been living in a cave, I’ve been writing their housing market report series since 1994.

What started as a simple project morphed into a fun, albeit gigantic, research project. I learned a lot about the evolution of the Manhattan housing market, largely through the amazing [3] incredible New York Times archives. This was right about the time of my website revision and semi-necessary hiatus so I am cleaning out my desk of posts I have been itching to write so please indulge me.

The article I wrote for Douglas Elliman was beautifully presented by their marketing department and prominently inserted in their Elliman magazine [4] (and iPad app [4]!).

Diane Cardwell of the New York Times in her “The Appraisal” (an incredible column name BTW) penned a great piece: In an Earlier Time of Boom and Bust, Rentals Also Gained Favor [5] that originated from my article and zeroed in on the 1920s and 1930s to draw a comparison to the current market.

I have the feeling my project is going to morph into something bigger – it’s just too interesting (to me). A few things I learned about the Manhattan market over this period:

Here’s a separate piece I also wrote during my DE research project (to clear my head after pouring through all the historical articles) which incorporates my “theory of negative milestones [7].”

While researching the last 100 years of New York City residential real estate I came to appreciate the one constant in the ebb and flow of housing. It is a market that has continually adapted to significant economic, political and social change. History showed us that the New York City housing market reacts to this change as an opportunity to reinvent itself resulting in more growth.

Despite significant challenges, New York has thrived during its transition from an industrial to service economy as a core driver of housing demand. Over the past 100 years, the city has been held together by a diverse economy linked with other economic capitals across the globe. Yet like the economy of today and the early part of the 20th century had a commonality in financial services. It remains an important sector, driving the creation of wealth and influencing the demand for housing.

“With the continued prosperity of the country as a whole and the tremendous activity on Wall Street, there is no reason why the new year should not be an extremely prosperous one in the real estate field.” – 1927 Douglas L. Elliman & Co., Inc. report (NYT)

Because the series of milestones are measured in decades and we live in the moment, it is hard to appreciate the many changes that define the housing market we currently enjoy. The housing stock moved from dependence on single-unit dwellings to apartment rentals to co-operatives to condominiums. It has ranged from overcrowded tenements to newly developed luxury highrises. The addition of new housing or re-purposing of existing structures has resulted in a wide array of residential property that forms the texture of the New York City real estate market.

An irony of this evolving housing legacy comes from the sense of permanence that resonates from simply gazing at the physical asset both as a shelter and as a home. Leaf through “before and after” photo books of New York and the revolving landscape is readily apparent.

Historic milestones mark the moment of change in the housing market, making conditions that existed before largely irrelevant to the “new” market, prompting new patterns and incentives. Participants seek out understanding and then re-enter the market.

Here’s a Manhattan timeline that includes a rough survey of luxury pricing.

1910’s The surge in demand for housing, World War I
[Sale: $8 PPSF, Rent: $40/Mo.]
A bustling economy, railroads were thriving and Manhattan’s population was at its peak of 2.3 million as it moved towards World War I. Over the prior 30 years, the Upper East Side and Upper West Side had transitioned from farmland with single-family houses to higher-density tenements and apartments. The Zoning Resolution of 1916 was a comprehensive zoning law passed to require height and setbacks to a new building so the surrounding streets could receive natural light. By now, rents were double those of comparable properties in Paris.

1930’s The 1929 Stock Market Crash and “The Great Depression”
[Sale: $5 PPSF, Rent: $45/Mo.]
Sales fell by 30% a year after the crash, but by the middle of the decade, the rental market began to improve. Douglas L. Elliman & Co., Inc. reported a 22% increase in the number of signed leases on the East Side. Rents increased 6% over the prior year and some buildings were reporting 100% occupancy. “…this will enable many properties to be placed on a sound financial basis where taxes and interest and other fixed charges can be met regularly for the first time since the depression.”

1940’s World War II
[Sale: $8 PPSF, Rent: $50/Mo.]
Manhattan townhouses sales begin to pick up but prices remain below peak levels during the “Roaring Twenties.” On the 30th anniversary of Douglas L. Elliman & Co., Inc. the company reported the highest number of rental transactions in its history. “Apartment builders are more active now than at any time in nearly a decade in the construction of new multifamily buildings on the East Side of Manhattan.” After the war ends, New Yorkers face a housing shortage as GI’s returned home. Large-scale housing developments emerged.

1950’s The post-World War II Housing Boom
[Sale: $12 PPSF, Rent: $60/Mo.]
The housing boom was the product of pent-up demand from the prior two decades as the household formation was outpacing supply. Apartment and co-op demand increased as buildable space became scarce. As the economy grew, the midtown central business district expanded. At least 15 large apartment buildings on Park Avenue just north of Grand Central Terminal, known as the “Gold Coast” were replaced by office buildings. Only 40 years earlier that location had been created by covering the railroad tracks north of the terminal.

1970’s World Trade Center Completed, Near Bankruptcy, Finishes Stronger
[Sale: $45 PPSF, Rent: $335/Mo.]
The first half of the decade saw the completion of the World Trade Center, a weak economy, and surging oil prices. Weak conditions were punctuated in 1975 with New York City narrowly avoiding bankruptcy despite the famous October 30 New York Daily News headline “Ford to City: Drop Dead” (which the president didn’t actually say). The second half saw improvement with a 1979 market survey by Douglas Elliman-Gibbons & Ives, Inc. indicating that co-op prices were up 224% since 1974.

1980’s Co-op Conversion Boom, “Black Monday” Stock Market Crash
[Sale: $250 PPSF, Rent: $1,700/Mo.]
This decade will be long identified with the enormous volume of rental to co-op conversions. Pre-war and post-war rental buildings were rapidly converted to co-op apartments and the phrase “insider pricing” for a tenant became the object of envy by those who were not. The 1987 stock market correction cooled off the conversion frenzy market leading into the next decade.

1990’s From Recession to Lofts and the “Silicon Alley” Dot-Com Boom
[Sale: $590 PPSF, Rent: $3,200/Mo.]
The New York City housing market began the period in recession. The city adopted a “broken windows” theory to focus on small details to improve the “quality of life” for its residents, resulting in significant unsung benefits for the housing market in the future. As the economy improved, the downtown loft market evolved into a mainstream part of the housing market. It was a perfect fit for the booming tech sector that provided a worthy counterpart to “Silicon Alley” on the west coast. The Lincoln Center area sees the beginning of significant luxury condo development.

2000’s 9/11 to Housing Boom to Lehman
[Sale: $1,200 PPSF, Rent: $3,800/Mo.]
After the events of 9/11 stunned the world, the housing market took less than two months to restart. The Federal Reserve pressed interest rates to the floor and the consumer responded quickly, leading to one of the largest periods of new development in the modern era. Wall Street enjoyed record compensation as the regional economy and the housing market thrived. The credit boom that fueled this growth in activity came to an end with the Lehman Brothers bankruptcy in late 2008 but began a rebound the following year.

2010’s Quick Rebound, Tax Credit and Housing Seasons
[Sale: $1,070 PPSF, Rent: $3,500/Mo.]
The decade began with a rebound in sales activity and the introduction of an expanded federal tax credit for new and existing homebuyers. By 2011, the housing market began to return to more normal seasonal patterns after several years of volatility. The August 2011 historic downgrade of US debt caused global investor panic and pushed mortgage rates to all-time historic lows but credit remained unusually tight. Trophy property sales, including an $88m condo purchase by a Russian billionaire, became more commonplace as the weak US dollar enticed luxury purchases by foreign buyers yet the balance of the market remained stable, albeit fragile.

Of course, there will always be more milestones for New York City to grapple with and that’s the constant above the fray.