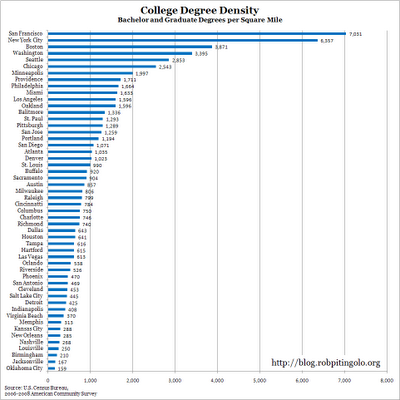 In a newly discovered blog, Extraordinary Observations by Rob Pitingolo (ht: WSJ/Real Time Economics) [2], I found a refreshing look at a key economic resource: “people” in his post “Where the Smart People Live” [3].

One of the trends I had observed during the housing boom was a move toward new urbanism. Re-purposed (my favorite new word) commercial buildings in urban centers to residential units and public spaces. It began to feel like urban areas were getting the better of the suburbs and perhaps, in theory, the more upgraded urban markets attracted talent from markets that didn’t adapt to the trend.

It’s becoming increasingly accepted that there is real economic value to bringing a lot of smart and entrepreneurial people together in the same place. This can be tough to measure, unfortunately. Perhaps best proxy we have available is educational attainment – usually measured as the number of people in a particular place with bachelor’s degrees or higher, as reported by the Census Bureau.