Sometimes, its easier to blame someone else for your troubles, especially someone you love. I’ll explain. 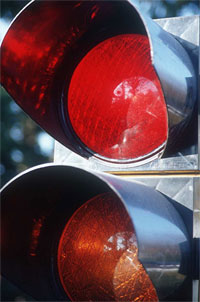 Red Light Theory [defined: You tend to remember all the red lights you stopped for and forget about the green lights that you didn’t.]

On one hand, the investor and real estate brokerage community can place a lot of blame on the media for poor or simplistic coverage of the housing boom, bubble, soft landing, etc. There are plenty of examples.

NAR has made a lot of mistakes in this regard by feeding them with endless stats that seem to contradict or confuse when compared to the text of their press releases. David Lereah, their economist/spokesman, has become the poster boy for anti-bubble speak spin.

However, there has also been equally insightful and excellent coverage of the housing market. Access to data is almost immediate and dissected ad nauseum. I think the issue is more about the source and bias of the data fed to the media and some of the lax reporting associated with it.

The source of some of the national data that is regurgitated locally is often made by brokers who don’t really understand what they are saying or are frustrated by their weakening ability to spin the results. For example, in the last media cycle after the end of the first quarter here in New York, prices did not fall. Somehow this became proof that there was not a housing bubble or it was proof that housing was still strong. In economic terms, I’d call that a credibility leap. One fact doesn’t support or link to another.

The media has a way of equalizing spin with reality. And thats good thing for the consumer.

In Michael Calderone’s post Why Not Blame The Media? [NYO] [1] he makes this point with utmost clarity:

But it’s always interesting to hear a Florida real estate investor blame the media because he can’t make a quick flip. Of course, it’s alright when headlines mention a “red-hot market” but any reporting on “cooling off” is just no good for business. So, instead of blaming rampant construction, increased speculative buying, why not take a jab at the media.

The result? Despite the investor and the brokerage community’s frustration with the media coverage, the market has not caved in at this point. There are no guarantees however, but if you believed the headlines last fall, we should have been toast by now. On the other hand, if you believed the headlines two years ago, we should be seeing double digit growth right now. It cuts both ways.

But the media has moved on to other headline topics for the most part but the consumer still has a strong appetite for housing coverage.

Sure, the purchase decision is an emotional one, but consumers still tend to vote and make decisions on economic terms (ie vote with their wallet) and often don’t make that final decision from a tabloid or other big media headline. I feel its a cop out to say that:

Investors and brokers should not flatter the media as having that kind of influence on the buyers out there. Consumers really are smarter than given credit for.