Here’s a good summary article by columnist Andrew Cassel about the conflicting statistics that have been released this week called The Economy | Volatility telling us something? [Philadelphia Enquirer] [1] It lays out all the arguments pro and con. He says:

I tell you, some weeks you risk whiplash just reading the economic news. 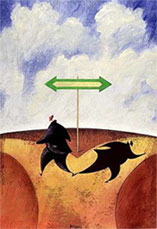 “Such discordance isn’t uncommon in economic statistics-gathering. Data can appear out of whack for a month or two because of reporting problems, or because something – a holiday, say, or bad weather – disrupts the normal flow of sales for a few weeks.

That’s why economists like to focus on longer-term trends, averaging changes over three months, six months or a year.”

The increased volatility, he suggests, could either mean that buyers are rushing to lock in on low mortgage rates so this could be a short term improvement or this is the sign of something far more severe since housing is connected to a large portion of the economy.

For a detailed analysis on why the New Home Sales data is statistically flawed, then a must read is Barry Ritholtz’s Big Picture blog post: New Home Sales Data: Don’t rely On It Either [2]

It seems to me that everyone is so honed in on anything that has to do with housing, that every month we go through this scenario, trying to recognize the inner meaning between the existing home sales stats and the new-home sales stats that we don’t know which end is up. I for one have been very leery of these stats for a while, especially when reviewing them on a month by month basis. New home sales are a small sample size and existing home sales are about 60 days behind the market. The two mixed together make for strange results.