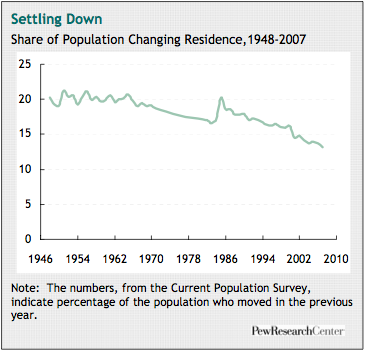 I am not one for mushy demographic survey stats, but this one intrigued me because it incorporates Census findings and overlaps with housing sales. “Who Moves? Who Stays Put? Where’s Home?” [1]

As a nation, the United States is often portrayed as restless and rootless. Census data, though, indicate that Americans are settling down. Only 13% of Americans changed residences between 2006 and 2007, the smallest share since the government began tracking this trend in the late 1940s.

A new Pew Social & Demographic Trends survey finds that most Americans have moved to a new community at least once in their lives, although a notable number—nearly four-in-ten—have never left the place in which they were born.1 Asked why they live where they do, movers most often cite the pull of economic opportunity. Stayers most often cite the tug of family and connections.

On the surface, this seems to contradict the surge in sales activity in 2004, 2005 and 2006 during the housing boom. However, NAR indicated that roughly 36% of all sales in 2004 [2] were investor or vacation home sales. I interpret this as a surge of secondary housing, not primary, which is one of the reasons the surplus housing stock is going to be difficult to absorb over the next several years. Although I can’t find an updated version of those numbers (likely because they would not be rosy enough), I suspect they are nearly a non-factor now.

Exercise: try counting the number of times you have moved in your entire life, including higher education if applicable. I moved roughly every 4 years before I left for college, then every year of college (2x) and every 2 years until I owned my first house. After that I averaged once every 6 years. 8 states. I am sick of moving.