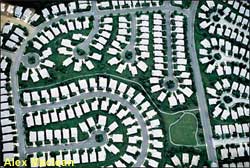 In Amir Efrati’s The Suburbs Under Siege [WSJ] [1] or here [2] homeowners love their cul-de-sacs while city planners find them to be a nightmare for traffic.

I lived on a classic cul-de-sac when I was a kid in the 1960’s when they were all the rage in new suburban tract housing. Our neighborhood was full of them. All the houses faced the street and there were no windows on the side of the house (that I remember), providing a sense of privacy (or isolation, depending on your perspective). Of course I remember losing control of my bike on the downhill leading into the cul-de-sac and splitting the bottom of a split rail fence (as well as my knee).

The term cul-de-sac is French [3] for bottom of the bag. Their objective was to limit traffic through residential neighborhoods thereby promoting quiet and enhancing safety for children. Today developers charge a premium for properties located on them for this reason and they remain popular. Their existence in a subdivision allows more houses to be squeezed into the land parcel.

But the New Urbanism [4] movement says they promote driving by separating streets, making it impractical to walk, isolating neighbors from each other and encouraging crime because of limited pass-through visibility.

Their safety has been a big source of comfort for many buyers.

“The actual research about injuries and deaths to small children under five is that the main cause of death is being backed over, not being driven over forward,” he says. “And it would be expected that the main people doing the backing over would in fact be family members, usually the parents.”

Armed with such arguments, critics of the cul-de-sac have won some victories in recent years. In cities such as Charlotte, N.C., Portland, Ore., and Austin, Texas, construction of cul-de-sac-based suburbs has basically been banned. In other places, cul-de-sac communities have been retrofitted with cross streets.

They still remain popular with homebuyers and I suspect they are so engrained into our suburban culture that they will remain a staple of design for generations to come.