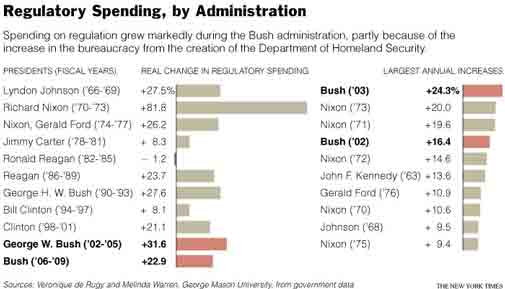 Regulation grew faster in the current administration as measured by annual increases, than in any since administration since the 1960s. That seems to be counter to the mantra:

Less government enables the free market to do its thing – self-regulation via market forces weeds out the weak?

One of the key issues of election campaign and the credit crunch was the lack of relevant regulatory oversight during the mortgage boom [2]. Certain members of the public (ahem) complained, blogged, cajoled, and even…gasp…resorted to rolling their eyes and sighing.

But no one was listening. The administration told us everything was fundamentally sound. This commentary has been occurring since at least 2004 [3] when all the lending snafus began to gain momentum. Frank, Dodd, Bush, Greenspan, Bernanke, Syron, Mudd, Paulson et al have told us things were fine until as recently as a few months ago.

I suspect most of them actually believed “the fundamentals were sound [4]” and the real problem was that they were not fully informed or had an understanding of systemic nature of the crisis.

Be careful what you wish for. [2] The sleeping giant in Washington has been awakened and it’s ready to eat. This weekend I took my family to DC for my high school reunion and a few days of rampant tourism whose highlight (for me) was going through an airport-like security screening process to eat mac & cheese at the Department of Agriculture’s employee cafeteria (ok, so offbeat cafeterias are my thing). I was struck by the enormity of the facility and the wildly inefficient service and presentation.

I shudder to think that this energy will now be channeled into regulatory oversight (hopefully not at the expense of good mac ‘n cheese for USDA employees).

We are now going to see a cultural shift toward more regulation, no matter who is elected in November. You can see it in the press releases and “on top of it” like responses from all the agencies – FDIC [5], OTS [6], FRB [7], FHFA [8] et al. Once that stops, it’ll take years to reign in.

Why can’t there be a middle ground rather than extremes? Do we only feel comfortable at the margins, on the edge?

We don’t need more regulation – we need smarter and ultimately less regulation. A reasonably level playing field where regulations set the boundaries, rather than direct specific actions is what allows free markets to work.

Case in point: The tennis courts at our town’s new high school have a 6 inch slope from end to end to promote drainage. The slope is so exaggerated you can clearly see it. Good for drainage, sucks for tennis.

Next thing you know, mac ‘n cheese won’t be as yellow as it used to be at the USDA cafeteria but at least their cups will be biodegradeable [9].