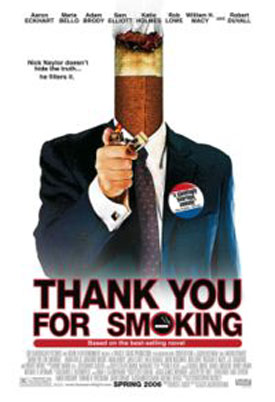 Its been a quite a 7-year ride for the National Association of Realtors [1] and their Chief Economist David Lereah. That era is now over and he is resigning to take another position. I wish him well and I hope he reconsiders his modus operandi.

The US housing market went through the largest property boom in history and is now weakening. He did what he thought he was supposed to do: promote his trade organization through market statistics and commentary. Unfortunately, his style did not translate well when market conditions weakened. He became a cheerleader rather than an insight provider.
I met him in the green room before a CNBC appearance and he seemed like a nice guy, but almost apologetic to the optimism he was pitching. He didn’t seem to buy into the message either.

I saw the movie “Thank you for smoking [2]” the other day and actually pictured Lereah in the staring role. See the movie and you’ll understand what I mean.

The blogosphere had a field day with the softballs that were served up on a regular basis (ie David Lereah Watch [3]). Yet the spin never abated.

One thing I never got over through all this was the loss of opportunity for the NAR to gain credibility with consumers. Instead of spinning so blatently, NAR could have taken the torch and become the market leaders for real estate expertise. The old school of thought that if you say it often enough and loud enough, people start to believe prevailed.

The excess spin that was generated seemed to be fully embraced by a large portion of the NAR membership but really served to further distance the trade group from the public. The blogosphere provided a challenge to the old rules of publicity that the organization was not able to adapt to.

I hope the incoming chief economist has learned from this experience and will make changes in the way information is disseminated to the public. Hopefully its less self-serving.

NAR has a treasure trove a great information.