The Federal Open Market Committee was widely expected to raise rates [1] a few weeks ago amid growing concerns over inflation [2]. However, that concern eased in recent weeks as it became apparent that the overall economy was still weak and the rate was left unchanged [1].

I would doubt there will be a change in the federal funds rate until after the election – a coincidence I am sure [wink].

Here’s a great discussion on Fedspeak and the Feds’s political connections [3] by Holden Lewis over at Bankrate.

But assuming not much fixing happens until after the election, can the next President actually do anything about the state of the economy? [4]

Here are the minutes from the last meeting [5]:

Tight credit conditions, the ongoing housing contraction, and the rise in energy prices are likely to weigh on economic growth over the next few quarters. 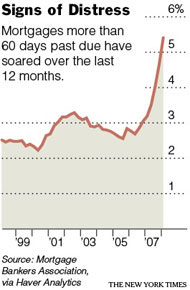 Of course, as Congress struggles to pass legislation to ease some of the homeowner pain (which, as a body of government, I feel the issue is far too complex for them to arrive at an effective solution because excessive compromise is the result), mortgage debt is snowballing [6].

Although 71% of Americans describe the federal government’s economic policies as bad, a recent Harris Poll found that More Now Believe Their Household’s Financial Condition Will Improve in Next Six Months [7].

I think it’s not just the Fed that’s unsure about the economy at the moment.