But housing can’t get better all by itself. That’s why its pretty silly to simply watch housing price trends. Prices are a lagging indicator if there ever was one.

Here’s a look at the four key economic indicators and their relationship to the housing economy – there’s a pattern here.

At 3.5% 3Q 09 GDP, forecasters are saying the economy has gotten out of the recession. But this is really a thin [1] metric – obviously fictional [2].

Let’s start with the big picture. At the end of 2008, official GDP was -6.4%. This was also likely an understatement, but for the sake of argument let’s treat it as “fact”. Move ahead to the Q3 2009 reading of +3.5% and we see a swing of 10% in U.S. GDP – in merely the span of nine months. The only factor in the U.S. economy pushing against this massive contraction (and debt implosion) is the “Obama stimulus package”. However, using the Obama regime’s own numbers, less than $300 billion of true “stimulus” would reach the U.S. economy over the course of this entire year.

Yet consumer spending fell 0.5%, the most since December 2008 so the recession is not necessarily over [3]. 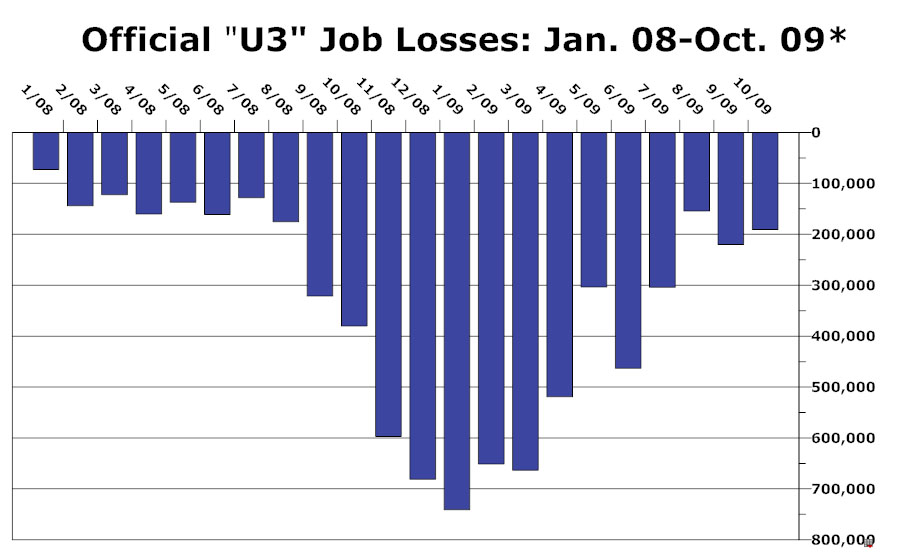 Source: Daily Kos [4]
With all the happy news surrounding this summer’s surge in home sales, its hard to imagine a housing recovery without jobs. In fact, unemployment is growing [5] and even the broader definitions of unemployment are showing more deterioration.

With the release of the jobs report on Friday, the broadest measure of unemployment and underemployment tracked by the Labor Department has reached its highest level in decades. If statistics went back so far, the measure would almost certainly be at its highest level since the Great Depression. In all, more than one out of every six workers — 17.5 percent — were unemployed or underemployed in October. The previous recorded high was 17.1 percent, in December 1982. 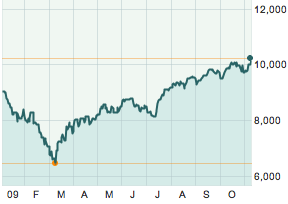 Source: MarketWatch [6]
The DJIA reached new highs for 2009 [6]. One of the key reasons for the housing surge has been the renewed (or simply improved) confidence by consumers in the financial system which began at the end of Q1 when the DJIA began its steady assent. It keep climbing. Perhaps its time to short the markets, or even housing? 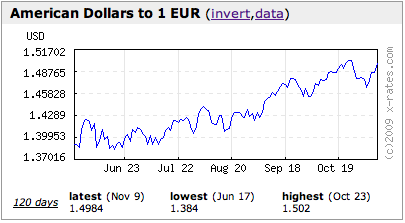 Source: MarketWatch [7]
Gold broke the $1,100 barrier as the dollar fell to $1.50 against the Euro [8]. The G-20 summit didn’t show support for the dollar. Look for more foreign investment of residential real estate if this trend continues.

“A lot of it is sentiment-driven and there the dollar is getting a vote of no confidence,” Mr. Dolan said. “The massive borrowing by the U.S. government is undermining confidence in the longer-term outlook for the dollar.”

Long term – housing doesn’t recover until the economy does.