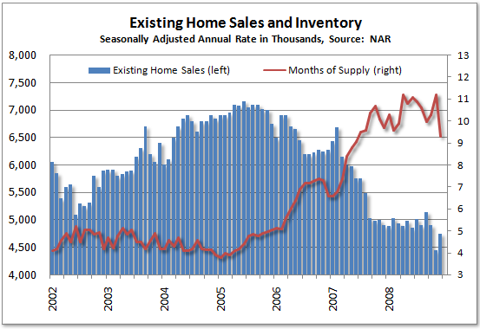 When I heard the latest NAR existing home sale stats [1] released today, I fought back the urge to ignore them because of the past spin of David Lereah [2]and the fact there is no national housing market [3], blah, blah, blah.

Lawrence Yun, NAR chief economist, said home prices continue to fall significantly. “It appears some buyers are taking advantage of much lower home prices,” he said. “The higher monthly sales gain and falling inventory are steps in the right direction, but the market is still far from normal balanced conditions. Buyers will continue to have an edge over sellers for the foreseeable future.”

Here’s type of coverage on the news release [5] today, which was consistent:

The number of existing homes sold in December rose 6.5% from the previous month, according to a report released Monday, as bargain hunters took advantage of plummeting prices.

The National Association of Realtors said that home sales increased to a seasonally-adjusted, annualized rate of 4.74 million units. That’s up from a revised pace of 4.45 million units sold in November and more than the rate of 4.4 million units projected by a consensus of industry analysts as reported by Briefing.com.

Tim Iacono, a regular contributor to Seeking Alpha [6], made a great chart trending number of sales and inventory (above). When you read the news coverage and press releases, you don’t get the perspective this chart provides:

In other words, this is so not over.