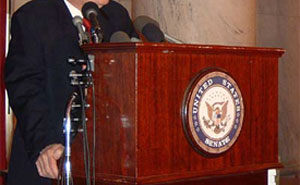 I would hope that these incidents reflect nothing more than bad judgement by the officials involved. Here’s a great recap by Portfolio.com [1].

According to the WSJ, US Senator Dodd (CT) got special rates on two mortgages [2]:

Sen. Christopher Dodd, a top figure in Democrats’ response to the housing crisis, defended through a spokesman two mortgages he reportedly received under a special Countrywide Financial Corp. program that awarded preferential interest rates to people referred to as “friends” of the company’s chairman and chief executive, Angelo Mozilo.

And US Senator Conrad also got a favorable rate [3] from Countrywide:

“It appears Countrywide waived one point on my mortgage,” Conrad, a North Dakota Democrat, said in a statement today in Washington. “Although I did not ask for or know that I was receiving a discount, and even though I was offered a competitive loan from another lender, I do not want to have received preferential treatment.”

Conrad said he also received a loan from Countrywide on an eight-unit apartment building in Bismarck, North Dakota, even though the lender typically serves properties that have four units or less. He said he had decided to refinance that loan with another institution.

James Johnson, former head of Fannie Mae [4], just resigned from the Obama campaign for getting favorable financing from Countrywide.

Property records show Mr. Johnson has received more than $7 million in loans from Countrywide since 1998, the first coming in the waning days of his Fannie Mae tenure. He borrowed $392,950 on a row house in Washington’s Dupont Circle neighborhood, with the rate set for the first five years at 6.375%.

At the time, initial rates for such loans ranged from about 6.2% to 6.5%, according to data compiled for The Wall Street Journal by HSH Associates Inc., which surveys lenders.

And that created an awkward situation for Senator Obama [5]:

Obama has made reforming how the housing market is regulated a centerpiece of his economic platform; as Fannie Mae’s CEO, Johnson worked closely with Mozilo facilitating what became an out-of-control mortgage boom. The massive accounting irregularities discovered at Fannie Mae after Johnson was no longer CEO (but still a consultant) don’t help either.

In other words, everyone seems to be completely and absolutely unaware of favoritism, but feel it is possible that favoritism exists [6].

Here is a visual recap of current and former government officials [7] associated with Countrywide’s efforts.

We are going through a mortgage/credit problem that began, was fueled and based on favoritism. The mortgage process during the housing boom was characterized by the lack of neutrality which is why investors ended up owning portfolios of inflated assets.

I am certainly exaggerating the impact here but the credit problems are unprecedented. Should it be a surprise to us that, even with the most neutral or unbiased intentions, a public official would be concerned how this would appear to the public if known? Isn’t the one of the goals of fixing the credit problem, to allay investor concerns over the lack of neutrality?

Or are we jealous that we didn’t get better mortgage rates. I know I am.