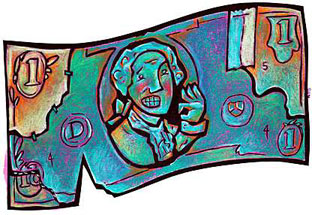 “U.S. house prices have risen by nearly 25 percent over the past two years, noted Bernanke, currently chairman of the president’s Council of Economic Advisers, in testimony to Congress’s Joint Economic Committee. But these increases, he said, “largely reflect strong economic fundamentals,” such as strong growth in jobs, incomes and the number of new households.”

This is likely to be one of the key topics of the senate hearings for his nomination.

He has maintained the the “cooling” of the housing market won’t hurt the economy. This is an interesting position since housing has been so closely tied to current consumer activity, which accounts for 2/3 of the economy.

If housing markets fall, Bernanke appears to be unwilling to use short term rates as a tool to prop them back up. The overall economy takes precedence over individual homeowners. Of course, with Greenspan, there has recently been a disconnect between mortgage rates and short term rates so it is not clear whether this subtle change in policy will result in any difference in the housing market.