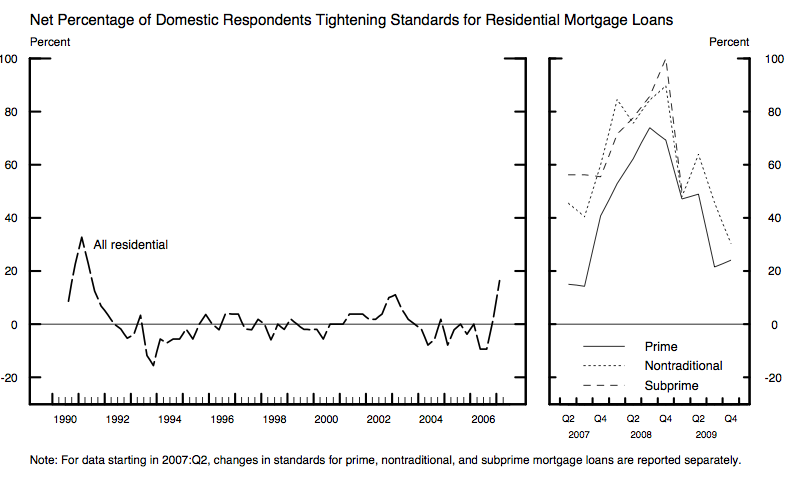 I’m thinking maybe credit isn’t going to lead us out of the recession. Banks are getting much enjoyment out of the wide spreads for now – gearing up for future carnage in commercial, auto loans, credit cards and industrial loans. This is apparent in the The October 2009 Senior Loan Officer Opinion Survey on Bank Lending Practices [1] that was released on Friday. Its kind of the Beige Book equivalent of anecdotal credit practices.

The report basically showed that fewer banks are tightening mortgage credit policy and mortgage demand is up. Of course this doesn’t mean much yet since bank lending policy can’t really can’t get much tighter.

In the October survey, domestic banks indicated that they continued to tighten standards and terms over the past three months on all major types of loans to businesses and households. However, the net percentages of banks that tightened standards and terms for most loan categories continued to decline from the peaks reached late last year.2 The exceptions were prime residential mortgages and revolving home equity lines of credit, for which there were only small changes in the net fractions of banks that had tightened standards.

About 25 percent of banks, on net, reported in the latest survey that they had tightened standards on prime residential real estate loans over the past three months. This figure is slightly higher than in the July survey but is still significantly below the peak of about 75 percent that was reported in July 2008. For the third consecutive quarter, banks reported that demand for prime residential real estate loans strengthened on net. About 30 percent of banks reported tightening standards on nontraditional mortgage loans, which represents a decline of about 15 percentage points in net tightening from the July survey. Only about 5 percent of domestic respondents, on net, reported weaker demand for nontraditional mortgages, the smallest net fraction reporting so since the survey began to include questions on the demand for nontraditional mortgages in April 2007.