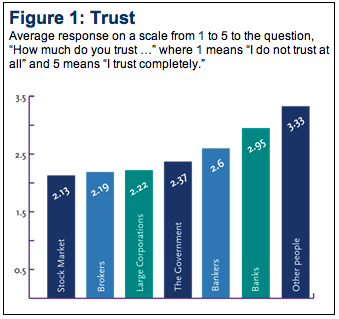 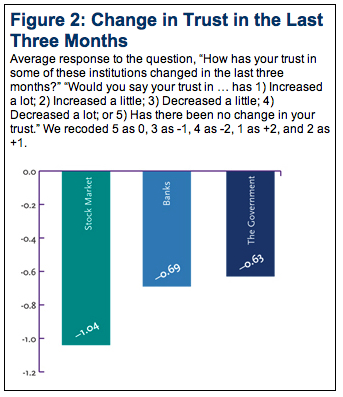 The missing ingredient today in the housing market, the economy and the financial system is trust.

Like consumer confidence, trust is a key factor [1] in all that is wrong with the economy.

While trust is fundamental to all trade and investment, it is particularly important in financial markets, where people depart with their money in exchange for promises. Promises that aren’t worth the paper they’re written on if there is no trust.

If a modern Rip Van Winkle had fallen asleep two years ago and woken up now, he would wonder what had happened to the U.S. economy. Two years ago, we were in the middle of an economic boom. Banks were eager to lend even at the cost of forgoing important covenants, and corporate America (and the entire world) was producing at full steam, so much so that commodities prices were rising in anticipation of a future scarcity. Today we are quickly sliding into a deep recession. Banks are not lending and commodity prices are plummeting in expectation of a dramatic slowdown of production throughout the world.

Neoclassical economic models cannot explain this dramatic change. There was no apparent shock to productivity nor a clear slowdown in innovation. The government has kept taxes low. The Federal Reserve has kept interest rates low and cut them even further. What happened?

Everyone agrees that this crisis originated in the financial system. When Lehman Brothers defaulted and AIG had to be rescued by the government in September, the economy was still doing all right. The rate of growth during the second quarter was still a comfortable +2.8 percent. How could the default of an investment bank, with very limited lending to the real economy, have had such a disastrous effect?