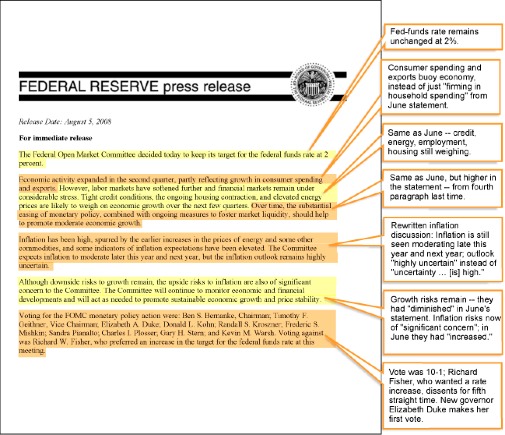 Good grief, I am in slow motion this month.

The Federal Open Market Committee kept the rate at [1] 2% for the second straight meeting yesterday. The WSJ breaks out the announcment FOMC statement in a regular feature called Parsing The Fed [1].

Two meetings ago, I suggested the Fed would hold for a while. I’ll stick to that with the slight modification that I would think they will raise rates after the November election. It’s a tough call because inflation concerns, while real, are…well, inflated.

Mortgage rates are not doing much and banks are being forced to enjoy the spread between what they can borrow from the Fed (federal funds rate) and what they can lend (mortgage rates). The large losses are likely being released by financial institutions piecemeal: so as to not scare their stockholders combined with the lack of mortgage rate reduction suggests a lot more losses that are going to be announced over the next few quarters.

On top of it, a bleeding Freddie Mac [2] will need to capitalize too.