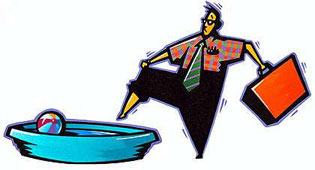 In Greg Ip’s article Fed Minutes Indicate Inflation Still a Worry for Some Officials [WSJ] [1] he indicates that The Federal Reserve sees that the risk for future inflation could rise over the next few months influenced primarily by energy costs but that this effect was not considered to be long term and seem to have 1-2 more increases to go.

Bernanke did not attend this meeting but his testimony was consistent, except for housing where the FOMC seemed to have more concern about housing than he does.

The minutes showed a higher level of concern about the housing market than Mr. Bernanke indicated at his testimony last week. “In some areas, home price appreciation reportedly had slowed noticeably, highlighting the risks to aggregate demand of a pullback in the housing sector,” the minutes said. Some officials thought the effects of an end to rising house prices were “potentially sizable,” and could be compounded by rising debt-service costs as variable-rate mortgages are reset at higher rates.