[This monthly market report is provided by Jeffrey Otteau of the Otteau Appraisal Group [1] in their September eNewsletter. Jeff also authors a series of widely followed quarterly market reports [2] on the New Jersey real estate market. This information is collected from various sources including Boards of Realtors and Multiple Listing Systems in New Jersey.] 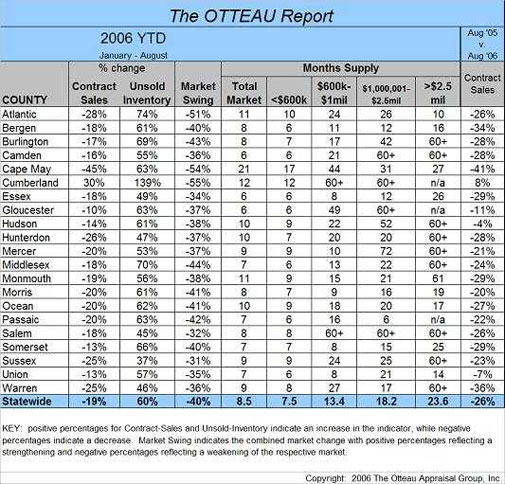 The residential market rebounded slightly in August as buyers took advantage of softening prices and declining mortgage rates. August contract-sales activity ran 6% higher than July, suggesting the overall market deterioration is beginning to slow. Also noteworthy is that the Unsold Inventory of homes on the market increased by only 1% in August, as compared to a 47% increase over the 1st 6 months of 2006.

Also contributing to the August sales performance are declining mortgage rates and unemployment rates as the Economy continues to create new jobs. According to Freddie Mac’s Primary Mortgage Market SurveyÂ® (PMMSÂ®), the 30-year fixed-rate mortgage (FRM) averaged 6.31 percent for the week ending September 28, 2006, down from last week when it averaged 6.40 percent. Rates have declined for 8 of the last 9 weeks and are at their lowest since March 2, 2006, when they averaged 6.24 percent. Last year at this time, the 30-year FRM averaged 5.91 percent.

A closer look at Unsold Inventory indicates an overall supply of 8.5 months, down slightly from 9 months in July. One year ago, Unsold Inventory reflected a 4 month supply. When analyzed by home price, the market continues to show the greatest strength below $600,000 with a 7.5 month supply as compared to 23.6 months above $2.5 million (see table above).

Next months report will be a key indicator of future trends as September marks the one-year anniversary of the current market cycle when home sales began to decline and Unsold Inventory started rising. 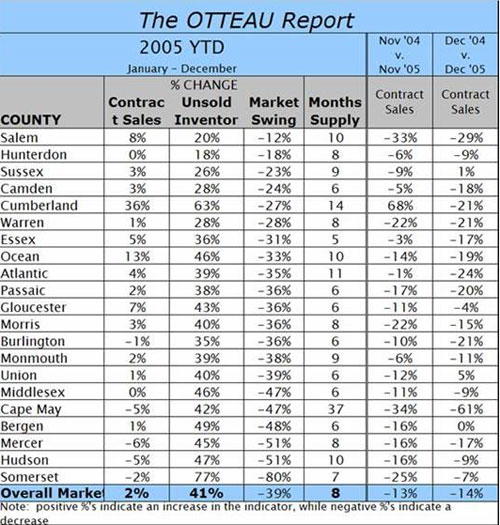