This monthly market report is provided by Jeffrey Otteau of the Otteau Appraisal Group [1] who also authors a series of widely followed quarterly market reports [2] on the New Jersey real estate market. This information is collected from various sources including Boards of Realtors and Multiple Listing Systems in New Jersey. 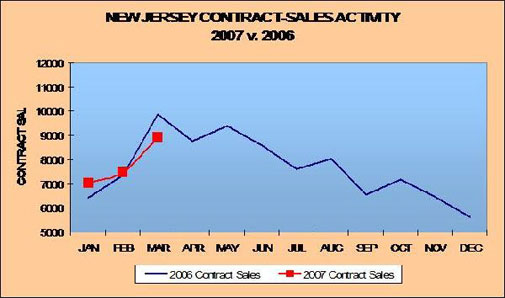 Following 3 consecutive months of rebounding sales activity, the New Jersey housing market down-shifted in March to a slower pace raising concerns about the much anticipated spring selling season. Of particular concern is the market’s ability to absorb record high unsold inventory levels in the face of weakening demand. Prior to this slowdown, the housing market was enjoying increasing sales activity due largely to gains in housing affordability resulting from a market correction in 2006 which caused a slight decline in home prices . Other reasons for the rebound include lower mortgage interest rates and a strong job market that drove salaries higher. As a result, housing became more affordable by the end of 2006 and sales activity rebounded.

That rebound has now stalled due to the ripple effects of Sub-prime mortgage delinquencies, which for the most part is a misunderstood topic. Most of the confusion stems from counting the number of foreclosures, which is being overstated in most media reporting. Don’t get me wrong – this is a serious problem that will continue to worsen between now and the end of 2008! But to date the actual pass-through rate of foreclosures into the housing supply has been minimal. For example, the national pace of actual foreclosures has been running around 22,000 per month while the reported figures have been 125,000 per month. Similarly, it was widely reported that national foreclosures topped 1.2 million in 2006 while the actual number was less than 1/5 of that.

The New Jersey figures are similarly overstated with actual foreclosures averaging about 200 homes monthly as compared to reports of nearly 5,000 per month. The error lies in the standard counting methods which include both actual foreclosures as well as all home mortgages that are in some stage of delinquency. And to make things worse, some of the same homes are being counted multiple times as they pass through various stages of the foreclosure process. Given that only a small percentage of delinquent loans actually reach the final stage of foreclosure, the reported figures are not what they appear to be.

To put this into perspective, consider that there were 270 foreclosures in New Jersey during the month of March against a backdrop of 70,000 homes on the market. In that context, foreclosures have thus far been insignificant in terms of any real effect on housing supply. However, concerns about the depth of this problem have translated into slower home sales due to widespread misreporting of the facts. In New Jersey, it was widely reported that there were 4,780 foreclosures in March when the actual number was 270. Another wrinkle resulting from the Sub-Prime issue is that mortgage lenders have begun tightening their loan approval standards in order to limit the number of new high-risk loan originations. This tightening has had the effect of either increasing the required minimum down payment ..or.. Increasing the monthly mortgage payment, which in turn reverses the gains in housing affordability realized last year. This is rapidly developing into a watershed issue as it transfers to all home price segments in the housing market. This is due to the fact that first-home purchase activity generates ripple effects all the way up to the luxury home market due to the trade-up activity it generates. Or more importantly, a decline in first-home purchase activity makes it less likely that luxury priced home can be sold.

And last but not least, the concerns about the implications of the Sub-prime problem are causing home buyers to rethink whether or not now is the right time to buy. That the current slowdown is occurring at a time when mortgage rates are at 40-year lows, home prices have declined, employment is at record high levels and an expanding economy is continuing to create new jobs reminds us that public-perception usually translates into market-reality housing.

At this point, the big question is whether the surge in sales activity that normally occurs in a spring market has been lost or delayed. Best indications are that there will be a 2nd leg to the spring market that will occur in late May and June as the basics of affordability, pent-up demand and possible interest rate cuts eventually take control. Supporting this scenario is the declining frequency of negative new stories concerning the both the overall housing market and Sub-prime foreclosures, as well as the significantly reduced pace of new construction starts which will result in less housing inventory. However, history has taught us that public perception can become a self-fulfilling prophecy given enough duration in time. So, it seems that the market is once again in a ‘wait & see’ position. Stay tuned for our next eNewsletter release later this month updating the housing market.