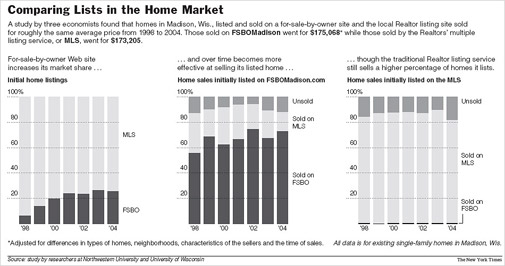 On Friday, a New York Times front page story by Jeff Bailey: One City’s Home Sellers Do Better on Their Own [2] covered the age-old topic: are Realtors worth their commission? The article discusses the results of a study by three economists that came from a debate on their own different home selling experiences.

Their conclusion was sort of, a resounding, kind of, well…no. Not in Madison, Wisconsin as it compared FSBOMadison.com [3] to the Realtors Association of South Central Wisconsin [4].

The conclusion…based on home-sales data from 1998 to 2004 in Madison, Wis., is that people in that city who sold their homes through real estate agents typically did not get a higher sale price than people who sold their homes themselves. When the agent’s commission is factored in, the for-sale-by-owner people came out ahead financially.

The study has been presented in many venues but is still in draft form and has not been vetted out by their peers. This particular topic has served as a lightening rod in the real estate industry because the current system has been the status quo for many years and the Internet has posed new challenges for Realtors to maintain relevancy. NAR claims that their services generate a higher price [6] for the seller which more than covers the selling costs. The sharp increase in housing prices over the past decade has caused the percentage of sales price format to see significant scrutiny.

The Freakonomics author Steven D. Levitt became the flashpoint [7] in 2004 with Market Distortions when Agents are Better Informed: The Value of Information in Real Estate Transactions [pdf] [8] which concluded that agents sell their own homes for more than their clients as well as the 2006 New York Times Magazine piece Endangered Species: Why Real-Estate Agents Are On the Way Out [7] which made the claim that Realtors are obsolete.

It seems to me that the basic issue they are addressing boils down to this: whether of not the sale of a home using the services of a Realtor realizes a higher price that covers the commission paid. It does not consider issues of convenience and other services, which I am not sure how that would be monetized.

Here are some thoughts on this new study:

That last point is particular critical to the results of this study. I believe the FSBO concept would have a greater chance of thriving when the housing market is booming and properties seem to sell themselves. However, in a weaker housing market, I would be less optomistic, although it certainly has its place. A listing has more competition right now in most markets and so the elevated marketing effort probably has more potential to differentiate a property. As markets continue to weaken, I suspect anxious home sellers will get more conservative, less anxious to take chances. However, it doesn’t mean that FSBO’s will languish, but rather their growth will slow.

FSBO services are more of a niche marketing product at the moment.

However, that role largely depends on whether Realtors are able to adapt to a post-housing boom market. The Internet has changed the cost dynamic for alternatives to the traditional agent sales process and FSBO’s are here to stay.