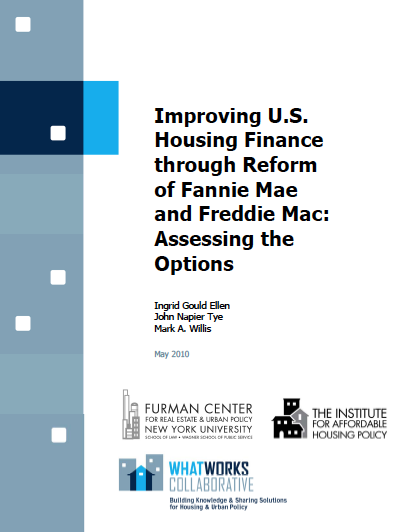 The NYU Furman Center for Real Estate released a white paper: Improving U.S. Housing Finance through Reform of Fannie Mae and Freddie Mac: Assessing the Options by Ingrid Gould Ellen, John Napier Tye and Mark A. Willis that lays out possible paths to take. They also lay out the functions they serve and were intended to serve.

A great primer on Fannie and Freddie.

After facing insolvency one year ago, Fannie Mae and Freddie Mac were placed in government conservatorship in September 2008. The Obama Administration’s recently released report on financial regulatory reform calls for a “wide-ranging process” to explore options for the future of the GSEs. The Furman Center, in cooperation with the What Works Collaborative, has conducted research to better understand six primary options for the future of the enterprises, ranging from nationalization to dissolution. This white paper provides an overview of the U.S. housing finance system and the basic operations of Fannie Mae and Freddie Mac before conservatorship. It then discusses the basic goals of a healthy secondary market for both the single- and multifamily market, and offers a framework to help to describe and understand the different proposals for reform. Finally, it looks in detail at some of the specific proposals now emerging for reform of the housing finance system. As the federal government contemplates the future of these two entities, we hope that this paper offers a useful framework to evaluate the alternative proposals.

They serve an essential function of creating liquidity for lenders by freeing up their capital to lend more through buying mortgage securities, stabilizing mortgage rates and establishing standardization for the secondary mortgage market. But they are hemorrhaging now with no concrete solution in sight.

There are a lot of good ideas in the paper (I’ve read it twice, and will look at a few more times).

Not to go all regulatory crazy here, but I like the concept of regulating underwriting:

The industry needs to be regulated as to its underwriting standards, the quality of the underwriting process, operational risk, the level of capital/reserves, and even the quality of its servicing of the mortgage loans and the rating of its securities.37 The ability to regulate these entities effectively would be facilitated by requiring, for example, that all securitizers be licensed or chartered. Such a regulatory system/environment would help guard against the proliferation of toxic products, poor quality controls, and unfair and deceptive marketing practices, and thereby prevent the kind of race to the bottom that we have just witnessed, in which safer products are driven out of the market place.

It’s going to be a work in progress, I’m afraid.