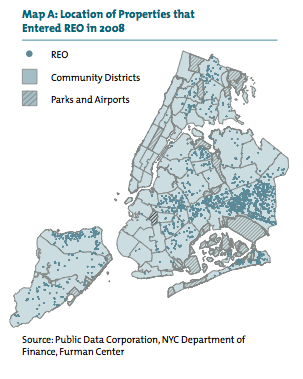 The Furman Center [1] for Real Estate and Urban Policy at New York University released a fascinating report on New York foreclosures called: Foreclosed Properties in NYC: A Look at the Last 15 Years. [2]

Here’s a key characteristic of foreclosures in New York state: 54% of properties that received an LP in 2007 had not, by the end of June 2009, been sold or completed the foreclosure process, and had not received an additional LP.

What’s a lis pendens [3]? Recording a lis pendens alerts a potential purchaser or lender that the propertys title is in question, which makes the property less attractive to a buyer or lender. After the notice is filed, anyone who nevertheless purchases the land or property described in the notice takes it subject to the ultimate decision of the lawsuit.

The average time to sell a property with a foreclosure filing in 2009 was substantially longer.