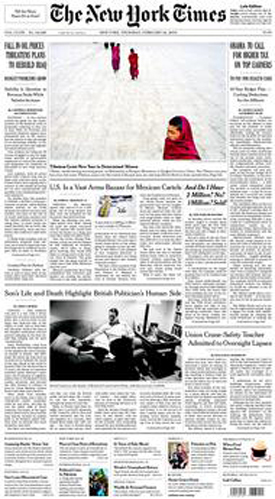 Weirdest thing – my original post was wiped out – must have been auctioned? – or was it my newly installed Safari 4 beta?

Well today was especially fun (after a 2.5 hour session at the dentist) because I was referenced in a front page story of the New York Times (I think it’s the 9th time and it never gets old). Teri Karush Rogers wrote a story about condo auctions called: And Do I Hear $2 Million? No? $1 Million? Sold! [1] (fun to see this in Paris too [2]).

Auctions are a way for the developer to get out of a project more quickly than existing marketing conditions permit and is usually done in markets with rapidly rising inventory (aka more competition).

An auction is a way to compress marketing time from the market norm which current is measured in terms of years, into a few days.

In the early 1990s, many co-op conversion stalled during the recession and the construction lenders became the new sponsors of thousands of co-op apartments. The auction became an effective marketing tool and was used quite extensively during this period.

In many cases, the developer of a building with stalled sales, has no choice because they don’t have the staying power to wait until the market recovers. At the same time the lender behind the developer may be reluctant to weaken their already weak balance sheet because it has implications for capitalization and their ability to perform lending in other areas of the institution.

Real estate auctions, rarely used in New York, have the potential to both move property and indicate to reluctant buyers what the true market prices are. Given the current sales drought, even a handful of auctions could reset prices for new condominiums citywide, said Jonathan J. Miller, the president of Miller Samuel, a Manhattan research and appraisal company. He said he expects the auctioned properties to sell for 40 to 45 percent below the asking prices of the first quarter of 2008, when the market peaked.

In the current market, the contraction of credit has restricted the demand for these housing units which is placing downward pressure on price levels.

“The general impression I get is that this period of denial — the market-will-get-better mentality — is coming to a close,” said Mr. Miller, the appraiser…