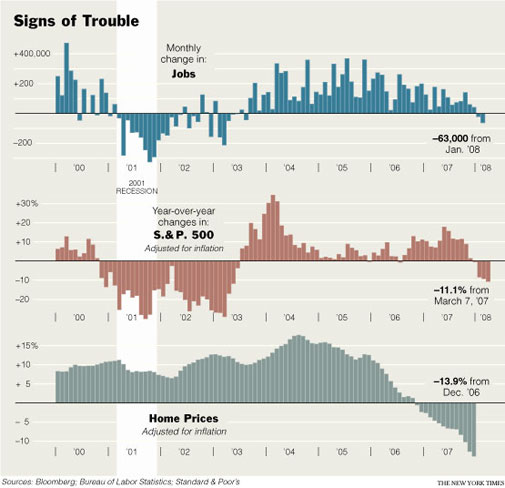 In David Leonhardt’ page 1 NYT front and center was an awesome chart which shows the trouble the economy is in. Jobs [2], financial markets and housing – that pretty much sums it up.

Most American households are still not earning as much annually as they did in 1999, once inflation is taken into account.

Employment has risen by 100,000, but even that comes with a caveat: there are also 600,000 more people who are working part time because they could not find full-time work, according to the Labor Department.

David’s article is based on the premise that the good times weren’t really of substance. Consumers as a force in the economy were driven by tapping their home equity. Their home equity was increased artificially because of easy credit. Ready credit enabled greater corporate revenues, mergers, etc. which made the financial markets happy.

Without liquid credit markets, employment weakens, housing slips and the financial markets are in turmoil.

Although housing is generally considered a trailing economic indicator, it is in sync with jobs and the financial markets.