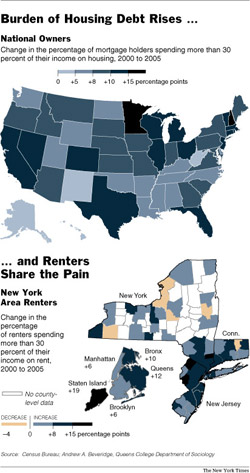 Housing costs (mortgage or rental) have risen sharply over the past five years according to new data by the Census Bureau and presented in the article by Janny Scott and Randal C. Archibald called Across Nation, Housing Costs Rise as Burden [NYT] [2].

The data was collected through 2005 so it does not reflect further rising mortgage costs and rental costs in 2006.

“People want to hang on and stay in the market,” said William H. Frey, a demographer at the Brookings Institution in Washington, “and they are willing to stretch themselves to find or to rent a house that is suitable.”

S. Lawrence Yun, an economist with the National Association of Realtors, said renters in desirable cities might be spending more of their income on housing in hopes of getting a toehold in places with good schools, better homes and a good quality of life. He said, “There is certainly a concern that people are devoting a large portion of their income to housing, and one of the reasons is due to the more limited housing supply.”

Its an interesting dilemma because conventional wisdom says that those priced out of the housing market during the boom, will simply rent and wait for the market to be more affordable, but at the same time rents are rising rapidly as many have the same idea. Here in New York, the rental market is currently doing what the sales market just got through doing.

The most pronounced increases in housing appear to be in urban areas, many of which have been revitalized in recent years but suburbs also showed significant gains in housing costs. In many metro areas, the surrounding suburbs have reached price parity making the move to the suburb one of lifestyle and not of cost savings.

Its possible that certain sales markets may benefit from a rental bounce back as home buyers become discouraged and decide to go to rentals only to suffer further dissappointment when they realize how much rents have gone up at the same time. Either way, its looking more expensive these days.

It certainly makes for the argument of Fed interest rate cuts in 2007 as the economy cools off.