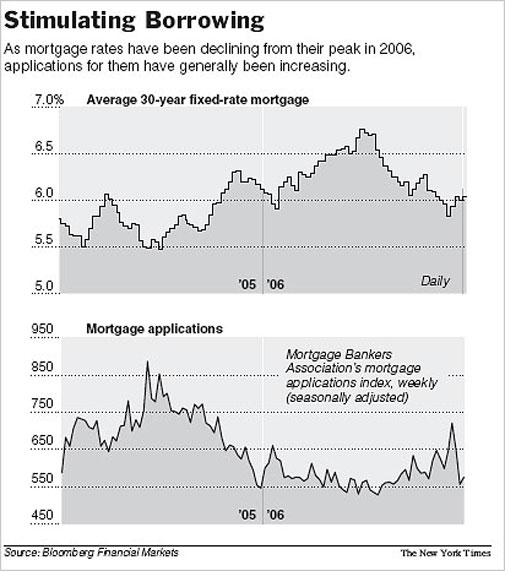 In Vikas Bajaj and Christine Haughney’s article Mortgage Applications Up as Home Buyers See a Break in Rates [NYT] [2] shows how mortgage applications are trending up as mortgage rates have trended downward since last year. This is a good thing, and while rising mortgage rates are what tripped the off switch of the housing boom engine, falling mortgage rates won’t flip with switch back on.

True, mortgage rates have brought people back into the market who were on the fence, and have helped people refinance at a favorable rate, but the effect on monthly payments pale in comparison to the difference in price levels versus affordability in many real estate markets across the country. The housing boom had gone on so long and with such intensity that the momentum in price appreciation became disconnected with affordability, helped along by the mortgage industry’s weakening underwriting standards.

Don’t get me wrong, low mortgage rates are a good thing, its just not the only thing that needs to happen for the national market to be strong across all 50 states. And I don’t agree with one of the quotes in the article. I don’t think mortgage rates are going to rise all that much, if at all this year (but honestly, who knows this?) if the national economy continues to slip. In fact, I think that if mortgage rates really were expected by many to rise later this year, refi and purchase volume would spike in much larger numbers.

This isn’t happening, reflecting a bit of the national economic malaise that is setting in.