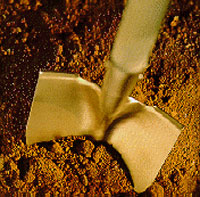 In the 46 biggest metro housing markets, land’s share of property prices increased on average to 51% in 2004 from 32% in 1984, according to the study authored by Michael Palumbo, chief economist in the Fed’s flow of funds section, and Morris Davis, a former Fed economist now at the University of Wisconsin.

This change is not just seen in the more expensive housing markets but throughout the country.

The Fed study also found that at some point since 1984 most large U.S. cities have gone through one pronounced price cycle in which residential land lost value for several years, usually after several years of rapid appreciation.

Land owners, well aware of the need for their asset, have been raising prices faster than market conditions. Actually the parallel with existing home sellers is uncanny. Plus land sales tend to be more speculative

In New York City, the laws of supply and demand has essentially haulted the viability of development but it will be at least 2 years before the supply in the pipeline begins to ebb. If a developer does not already have a site purchased or assembled within the past several years, the sales prices at the end of the development coupled with the jump in construction costs have essentially ended new construction of condominiums in this cycle. Typical residential developers in urban areas do not hold sites like commercial developers do, of course there are always exceptions (15 CPW is a prime example). Projects coming online now were usually initiated 1-2 years ago.

The Fed study concludes that the increasing importance of land for development will keep the pressure on property price appreciation and create more volatility over the next 20 years.