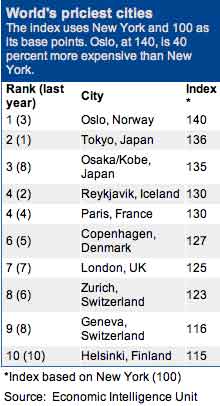 Oslo beats out Tokyo as priciest city: New York, the priciest American city, fell to No. 27 on world list [CNN/Money] [1].

Are they kidding me? New York is 27th on the list and yet its the priciest American city? I guess I am not unlike many here who see New York City, as former Mayor Guiliani dubbed, the Capital of the World, so I assumed we’d be at least top ten. Has anyone tried to rent a 2-bedroom apartment here lately?

Actually last year, New York was 23rd on the list so its become relative cheaper to live here.

“For the first time in nearly a generation, Tokyo no longer ranks as the world’s most expensive city, according to a survey released Tuesday by the Economist Group.”

“The biannual survey, which covers 130 countries, found Oslo, Norway as No. 1 in terms of cost of living. Tokyo fell to No. 2. “