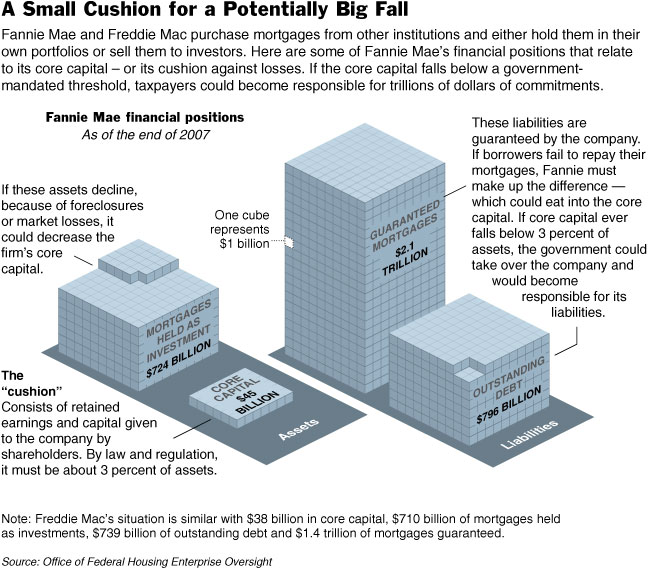 Ok, let me get this straight. Fannie Mae:

Ok, what am I missing here? It seems to me that the GSEs can not be the housing market’s sole saviours and we risk serious damage to our financial system if housing drops sharply this year and Fannie & Freddie get taken over by the government and assume the liabilities…

But some financial experts worry that the companies are dangerously close to the edge [5], especially if home prices go through another steep decline. Their combined cushion of $83 billion — the capital that their regulator requires them to hold — underpins a colossal $5 trillion in debt and other financial commitments.

The companies, which were created by Congress but are owned by investors, suffered more than $9 billion in mortgage-related losses last year, and analysts expect those losses to grow this year.

More regulation is need to protect the GSEs from faltering. OFHEO lowered their capital requirements in exchange for making Fannie Mae go out and borrower $6B to help protect against further housing market declines.

“Regulators need all the tools they can get to make sure these companies don’t fail, especially since we’re talking about entities that have over $5 trillion in financial commitments and debt,” said Senator Richard C. Shelby of Alabama, the senior Republican on the Senate Banking Committee. “Six billion dollars looks like a pretty paltry sum, and if we get into a further housing downturn, that capital can go pretty fast.”

The dilemma (although its not really a dilemma because there few other options) is whether to entrust the GSE to get the nation out of the mortgage problem that is keeping housing from stabilizing.

Increased roles for Fannie and Freddie could be just what the doctor ordered [6] to maintain confidence and liquidity in the mortgage markets at a crucial time and stave off a far greater crisis. However, if the crisis continues to deepen, these companies could go under and possibly push the worldwide financial system into turmoil.

William Poole, a former Federal Reserve Bank president, said that Fannie and Freddie are “at the top of my list of sources of potentially serious trouble.” And according to Senator Mel Martinez, a former secretary of housing and urban development, the companies “could cause an economywide meltdown if they got into real trouble and leave the public on the hook for billions.”

It seems to me like this is one small solution of many others that are needed. It’s going to be a long time to ride out this downturn and common sense says that the GSEs can’t weather it alone. FHA lost money last year too. I am starting to think we are making things worse by trying to fix the problem.

Here’s a great piece by Randall Forsyth of Barrons called Show Me the Monet [7] where he says more than half of all homeowners who bought in ’06 are underwater and that’s the tipping point for foreclosures. He wonders how the worst of the credit crisis can be behind us.